Director Yuki Tanada, a special guest at Nippon Connection this year, is one of a number of women directors creating a niche for themselves in Japan. Traditionally, the role of director has been seen as a man’s job, but at the Podium Discussion: What’s Up With the Women?, producer Yukie Kito said that women make up 70% of filmgoers in Japan. Therefore, it only makes sense that more women should go into directing. Women have played key roles behind the scenes since the inception of the cinema industry, doing continuity (like Kurosawa’s assistant Teruyo Nogami) and screenwriting. According to Kito, women dominate the fields of producing and marketing films in contemporary Japan.
If Ain’t No Tomorrows (Oretachi ni asu wa naissu, 2008) is representative of what women directors have to offer, then I am truly excited about the future of Japanese cinema. On the surface, Ain’t No Tomorrows begins as a standard drama about the life of teenagers. Standard teenage types are set up: the rabble-rouser, the fat kid, the teacher’s pet, and so on. Rabble-rousing teen Hiruma (Tokio Emoto) leads his friends in the bullying of fat student Andou (Ini Kusano). They give him the nickname ‘Boobs’ because of the extra fat on his chest, and pay him ¥100 to feel up his man-boobs while they fantasize about their big-chested classmate Akie (Ayame Misaki). Akie, meanwhile, resents that boys lust after her only for her looks and aren’t interested in her as a person. Rounding of the main characters are Miné, the good-looking guy who generally follows what the crowd is doing and bespectacled Miwako plays the role of teachers pet.
The stereotypes begin to get overturned with the introduction of Chizu, a naïve girl who Miné discovers face down in a park with blood running down her thighs. Although her uniform indicates that Chizu is from the same school as Miné, he has never seen her before and we share with him his initial fear that she has been the victim of a rape. When he wakes her, he discovers that she has only been the victim of her own panic. Chizu has gotten her period for the first time quite late, and being motherless doesn’t understand what is happening to her body.
The introduction of Chizu leads to the male and female characters pairing off and tentatively negotiating their first sexual experiences together. The film gives a raw depiction of teenage sexuality and the peer pressure to have sex in all its awkwardness and embarrassment. Tanada foregrounds the ignorance of teenagers about the mechanics of sex and the functioning of their own bodies. Receiving little or no information from their parents and their school, the young people have to learn from each other about how things work.
By the end of the film, each of the six central teenaged characters has risen above character ‘types’ and evolved into complex characters with hidden facets. Tanada has managed to nuture some remarkably sensitive performances out of her young cast. The characters of Miné and Andou were the most nuanced depictions of teenaged boys that I have ever seen. Ini Kusano, who plays the fat boy Andou, appears to actually lose a lot of the weight for the final scenes.
During the Q&A that followed the screening, Yuki Tanada explained that she had had low expectations for the films success because of its limited release, but had been quite pleased so far with the critical response. The film has struck a particular chord with audiences in their 30s and 40s who recall their teenage years with some bitterness.
This film is due out on DVD on May 22nd in Japan. Links are provided below for other films by Yanada that are available on DVD. The original manga for this film is also availabe. 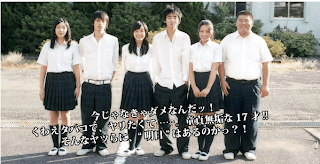