Ikki Katashima’s directorial debut film Serial Dad (小森生活向上クラブ/ Komori seikatsu kōjō kurabu, 2008) had it’s first screening outside of Japan at Nippon Connection last night. It is a black comedy along the lines of Kind Hearts and Coronets (Robert Harmer, 1949) and Charlie Chaplin’s Monsieur Verdoux (1947), but with the quirky fantasy mixed with unease found in many recent Japanese films like Memories of Matsuko (Tetsuya Nakashima, 2006).

Serial Dad tells the story of a salaryman called Komori (Arata Furita) who is stuck in middle management and bored with his life. This is visually portrayed by him fiddling over the fried egg breakfast his wife has prepared for him at home, as well as his ambivalent attitude towards his family and co-workers.

On a train ride home one day, the woman standing behind him loudly complains to her friend that he is a chikan (someone who gropes women on crowded trains). The next day, when he sees her doing the same thing to another innocent man, his blood boils and he fantasizes about pushing her in front of an on-coming train. This fantasy leads to a comical nightmare in which the woman, drenched in blood, crawls up from the railway tracks and taunts him in the style of the ghosts of old Mizoguchi movies. The dream ends with a figure of Jesus (inspired by the Christian messages Komori regularly sees posted on walls about town) hands him a gun with which to finish the woman off. 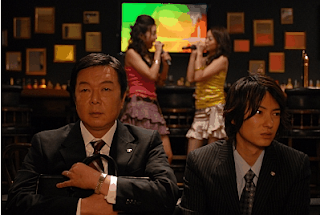 This success leads to Komori regaining his appetite for his wife’s heavy breakfasts and being more pleasant and in-charge at work. It also leads to him fantasizing about becoming a Clint Eastwood-style vigilante in a direct spoof of the Robert De Niro character in Taxi Driver (Martin Scorcese, 1976). Soon, his fantasy life becomes reality, as Komori begins to knock off people whom he feels are making the lives of others worse. With each success, Komori’s sex life with his wife improves, his family life improves, and his cheerfulness and industriousness at work increases.

Komori’s efforts begin to spiral out of control as one after another, more work colleagues discover his mission and join in his efforts. They form the Komori saviour and execution club, known as “Komori seikatsu kōjō kurabu” (Komori’s Social Betterment Club), which is the original Japanese title of the film. At about three quarters of the way into the film, it becomes clear that the director is faced with the dilemma of how to end the film. On the one hand, the audience has grown to love the Komori character with his affable charm, but on the other hand he has taken justice into his own hands and become a serial killer. In Kind Hearts and Coronets and Monsieur Verdoux, the eventual end for the main protagonist is inevitable, but in Serial Dad there are so many elements of fantasy that other possibilities are opened up by the script. I will not spoil the ending here, suffice to say that I found it a bit disappointing. However, the film is well worth watching for its comic charm and send-ups of American action movies.