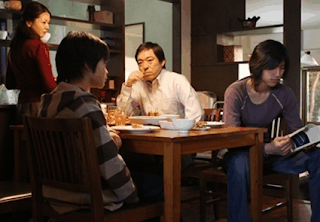 The premiere film at Nippon Connection in Frankfurt am Main last night was Kiyoshi Kurosawa’s critically successful film of last year, Tokyo Sonata. It tells the story of Ryuhei Sasaki (Teruyuki Kagawa), a salaryman in his late 40s who suddenly loses his job but out of shame cannot bring himself to tell his family. Instead he pretends to go to work each day, when in actual fact he is looking for work and lining up to get a free charity lunch with other jobless and homeless men.

While the film is very timely with the current recession, the story is based on the situation in Japan in the late 1980s when the economic bubble burst and many salarymen found themselves living on the streets or doing menial jobs to get by. The original screenplay was written by an Australian Max Mannix but was rewritten by Kurosawa and Sachiko Tanaka. At last night’s screening, producer Yukie Kito said that the original story focused on the relationship between the Sasaki and his youngest son Kenta (Kai Inowaki). Kurosawa expanded the roles of Sasaki’s wife Megumi (Kyoko Koizumi) and elder son Taka (Yu Koyanagi).

Critics have seen this family drama as a departure for Kurosawa, who is better known for his horror films like Cure (1997) and Kairo (Pulse, 2001). However, Kurosawa has shifted the horror from an externalized force to an internalized one. The horror that Sasaki faces is not only the realization that he has no skills with which to find another job but that he risks losing his authoritarian role at home due to his own hypocrisy. His wife faces the horror of realizing that after dedicating her whole life to being a housewife and mother, she may need to start all over again on her own. Their sons face the horror of realizing the fallibility of their father. Kenta’s grounding is also shattered by his loss of respect for his school teacher.

The film gets its name from the piano sonata played by the young son at the end of the film. As in a sonata, each character in the film elaborates upon the main theme of self-discovery and personal change. Sasaki must learn to swallow to his pride and take a lower class job, his wife must play a stronger role as a decision maker in the family, Taka joins the American military in order to find a purpose in life, and Kenta finds his path through music. Many issues are left unresolved in the film, such as the lack of communication between the family members.

This could have been a very morose film, if not for the quirky injections of humour throughout. The most enjoyable of which is a cameo appearance by Kōji Yakusho, a long-time Kurosawa collaborator, as a hapless burglar. Kanji Tsuda also puts in a tragicomic turn as Sasaki’s old school friend Kurosu, who has also lost his job and puts on the façade of the working salaryman with his constantly ringing keitai-denwa.

The look of the film is beautifully rendered. The film stock had a sepia quality about it that reminded me of art films of the 1960s and 1970s. The framing of scenes, particularly within the Sasaki family home, is beautifully done. When the family sits to meals at their Western-style table, they are usually framed through the stairs or kitchen shelves in a manner that reminds us visually how trapped they all are by their various circumstances.

Tokyo Sonata will be released by Eureka on DVD and Blu-Ray on June 22nd.