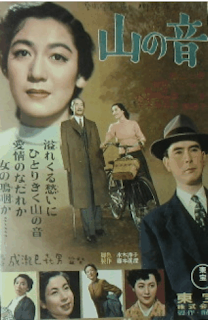 One of Mikio Naruse’s most acclaimed films, Sound of the Mountain (Yama no Oto / 山の音, 1954) is an adaptation of Yasunari Kawabata’s novel of the same name, which had been published in serialized form between 1949 and 1954. The film tells the story of Shingo Ogata, an aging Tokyo salaryman who begins to realize that his family is slowly coming apart at the seams. He has a rather perfunctory relationship with his wife Yasuko (Taruko Nagaoka), he learns that his son, Shuuichi (Ken Uehara) is openly cheating on his daughter-in-law (Setsuko Hara), and his daughter (Chieko Nakakita) leaves her husband to return to the family home in Kamakura with her two young daughters.

Having watched indulged in watching many of my favourite Ozu films in recent weeks, the sharp dialogue in Sound of the Mountain came as a real shock. Antipathy is not merely hinted at through gestures and averted gazes, but put into words designed to injure other members of the family. Shingo’s wife and daughter are both jealous of beautiful, dutiful Kikuko and try to bring her down by reminding her that she is childless. The daughter, Fusako, feels hurt by her father’s partiality for Kikuko and suggests that he neglected her when she was growing up. Yasuko clearly harbours some resentment for the fact that Shingo only married her because her older, more beautiful sister died. The son, Shuiichi injures everyone through his self-centered, disrespectful behaviour.

The one ray of sunshine in this dysfunctional family is the warm relationship between father and daughter-in-law. We are clued into this in their first scene together, when they meet up by chance on their way home for dinner. After Shingo points out a sunflower in a garden – an image that provides an unusual metaphor for Shingo’s theory about how wonderful it would be if people could wash out the insides of their heads and start afresh – as well as indicating that the film begins in the late summer. Naruse’s normally static camera becomes animated and tracks along with them as they walk home together. Their close relationship is first indicated by their pleasant banter and then emphasized when they discover that they both brought home shellfish for dinner at Enoshima’s local shop. Shingo bough sazae (sea snails) and Kikuko bought lobster and shrimp. 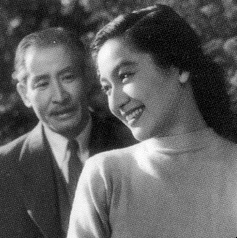 The film begins quite lightheartedly with many amusing moments designed to draw us into an identification with the main protagonist, Shingo. For example, early on in the film there is a wonderful scene where Shingo sits contemplatively at the door smoking, looking out into the moonlight at his perfectly composed back garden. His reverie is interrupted by the snores of his wife. He tries to read for a while, but her snores are too loud for that, and he pinches her nose in an effort to abate her snores. This moment informs us, with humour, of the difficult relationship Shingo has with his wife, but this lighthearted introduction to Shingo does not prepare us for just how startlingly bad his domestic life is about to come.

From the perspective of someone who has grown up in a predominately Judeo-Christian community, like I have, it was fascinating to see how matter-of-factly the very difficult subjects of adultery, divorce, and abortion are dealt with my the characters in Sound of the Mountain. The subject of abortion was pretty taboo in Hollywood films of the 1950s and in contemporary Hollywood films it comes with a lot of emotional and political baggage. I don’t know what the views of Japanese audiences in the 1950s would have been but we can gather a few things from the character responses in Sound of the Mountain. Kikuko, although desirous of having children, seems to put the prospective life of the child ahead of her own desire for motherhood. She looks at her sullen young niece Satoko, and sees how the child suffers because of her parents’ broken marriage. Although it is not said explicitly, the film implies that Kikuko does not want a child of her own to suffer in the same way. The other characters do not moralize on the subject, but instead react in highly personal ways to news of her abortion. Her husband takes it as a slight against him, that Kikuko would not want to have his child. Her parents-in-law are hurt that she made the decision independently and did not discuss her dilemma with them first.

My biggest frustration while watching Sound of the Mountain was that we never really learn what Kikuko’s thinking. As in Ozu’s films, Setsuko Hara’s character expresses herself through expression and gesture not words. It was not until I ruminated on the film overnight that I realized what Naruse was doing with the film. We can’t know what Kikuko’s thinking because the film restricts itself almost entirely to Shingo’s point-of-view. Any scenes for which he is not present, such as the brief cameo of his son-in-law in conversion with his son, he learns about soon afterwards.

Kikuko’s face is like the Noh mask that Shingo receives when a colleague passes away. This reference is made explicit when the mask is described as looking like the face of a child from certain angles. Kikuko’s husband had earlier told his father that he finds it difficult to consummate their relationship because he sees Kikuko as being too child-like. Noh masks are famous for their uncanny ability to appear to change expression when tilted. Like the mystery of the changing expressions on the Noh mask, Shingo spends the whole movie looking at Kikuko’s face and trying to decipher what she is feeling.

For me, the Sound of the Mountain is a kind of unrequited love story about the relationship between Shingo and Kikuko. As in real life, there is no neat resolution at the end of the film. The final scene takes place in quiet winter beauty of Shinjuku Park, where Shingo and Kikuko say farewell to each other. Although Kikuko’s future is uncertain, the openness space of the park contrasts with the confined spaces of the Ogura family home among the hills of Kamakura, suggesting the future possibilities for Kikuko now that she is free from the confines of her loveless marriage. With a minimalist visual aesthetic, Naruse has created a remarkable portrait of the internal workings of a 1950s Japanese family.

This film is available from Eureka as a part of the Masters of Cinema Naruse Box Set Volume One. No word yet on when we can expect the next volume of Naruse films (originally planned for release in late 2007), but the BFI does offer its own Naruse Boxset. Among other amazing Japanese classics in their catalogue, Eureka recently released the rarely screened Kon Ichikawa films Kokoro (1955) and Alone Across the Water (Taiheiyo hitori-botchi, 1963). They will be releasing Tokyo Sonata on DVD at the end of May.

To order the Japanese DVD of the film: Yama no Oto / Japanese Movie