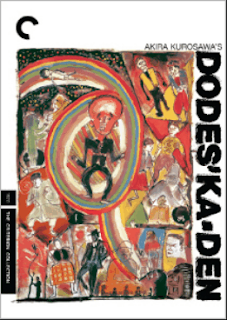 Criterion has just released Akira Kurosawa’s first colour film, Dodes’ka-den (どですかでん, 1970) on DVD. The film is a radical departure in terms of style and subject matter from Kurosawa’s earlier work and its commercial failure led to a period of depression and his attempted suicide in 1971. Critics, on the other hand, have praised the film for its unflinching portrayal of people living in slums on the outskirts of Tokyo. It was nominated for an Academy Award for Best Foreign Film in 1972.

The DVD includes the 36-minute documentary Akira Kurosawa: It’s Wonderful to Create which includes interviews with cast and crew members. There is also an accompanying booklet with an essay by Stephen Prince and an interview with Kurosawa’s script supervisor Teruyo Nogami, author of Waiting on the Weather: Making Movies with Akira Kurosawa. Dodesuka-den was not featured in Waiting on the Weather, so this interview is a real treat. They also asked her to contribute one of her humorous illustrations of the film production. You can see her illustration and read her insightful interview here on the Criterion website. The film trailer is available here.