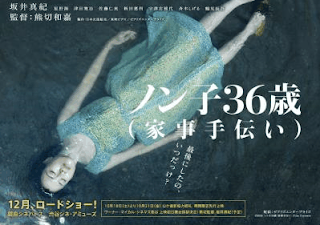 Nippon Connection runs from the 15th until the 19th of April this year. They published their programme earlier this month and the excitement is mounting. As always, they have a packed schedule of events and it will be difficult to decide which events to attend. This year's Nippon Retro features pink films. The Nippon Culture events include everything from a tea ceremony to a Butoh dance workshop. For me the most curious event in Nippon Culture is the "Sound Concert with Silent Film" directed by Yukihiro Ikutani with sound composition by Tetsuya Hori.

I'm going to try to attend as many of the short film selections in the Nippon Digital screenings as I can.... though it will be hard to decide what films from the Nippon Cinema screenings to miss out on. I am glad to see that they are doing two screenings of some of the more popular selections this year. I'm sure, for example, that Tokyo Sonata and Genius Party are high on everyone's list of films to see!

The films up for the Nippon Cinema Award this year are:

The Nippon Connection site (follow the above links) gives links to official sites for all these films. Nippon Connection recently posted the following promo showing just how awesome last year's festival was (see below). This year promises to be equally as exciting.

Posted by Cathy Munroe Hotes at 4:33 am