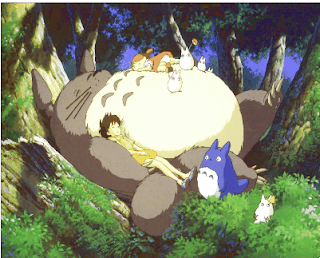 If you’re a parent and the studios have got you down with the current vogue for high-paced, action-packed animated films that lack the innocent charm of early Disney films, then I highly recommend that you introduce your child to the world of Hayao Miyazaki. For the very young, you can do no better than Tonari no Totoro (となりのトトロ、My Neighbour Totoro

Set in an idealized 1950s Japan, the film is told from the perspective of two young sisters, Satsuki and Mei Kusakabe, aged 11 and 4 respectively. Their mother has taken ill and is in the hospital indefinitely and their father, a university professor in Tokyo, moves them to a new home in the countryside to be closer to the mother’s hospital. As the girls explore their new home, a traditional Japanese house, they discover that it is inhabited by little black balls with google eyes called kurokurosuke, a term which has been translated variously as dust bunnies or soot sprites. When the children tell their father and the obaasan (grandmother) from next-door, the adults do not accuse the children of seeing things. In fact, the obaasan says that she, too, could see sprites/fairies when she was a young girl. I love that the adult figures in this film encourage the children to use their imaginations and to believe in things that they can see that perhaps not everyone can.

While Satsuki is at school one day, Mei is playing alone in the garden when she discovers a giant Totoro living at the foot of the giant camphor laurel tree near their home. Totoro seems to be a kind of spirit or fairy related to the camphor tree. Although Miyazaki himself has denied any connection to religion, the tree does have a rope around it that in Shinto indicates that the tree is a kami, or sacred spirit. The giant Totoro and the two smaller Totoros have a playful relationship with the girls at first: flying in the sky and playing ocarinas together, but later in the film when Mei runs away and gets lost, Totoro and a Catbus help Satsuki find her again.

The thing that makes this such a wonderful film for children is its simplicity. Unlike a typical American animated feature, there are no bad guys, no violence, and no chase scene at the end. Instead, the film shows the children experiencing joy, fear, anger, and other emotions as they deal with the trials of growing up as well as their underlying fear that their mother may die of her illness. The imaginary creatures act as helpmates on the children’s journey of discovery, but they never speak (there is no condescending adult moral imposed on the film), rather the children intuit what Totoro wants to show them.

My children have fallen in love with the theme song and Totoro. Even my one and a half year old sings the song to herself when she plays. That said, I want to emphasize that this is a film that can be enjoyed by people of any age and I highly recommend it as an antidote to over-the-top CGI features.