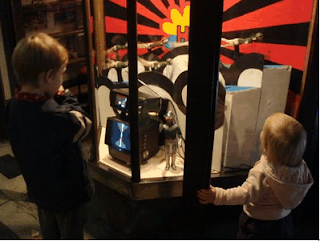 Last week, I discovered the work of Tomoyasu Murata (村田朋泰) at a small gallery on Hongo Dori, just across the street from Tokyo University. The display window featured a tongue-in-cheek Japan-themed installation which caused many passersby to pause for a moment’s reflection. Small figures of men in army uniforms swam, their feet fluttering and their arms swirling through the sea under an iconic hinomaru-themed background. In the foreground, next to a figure of Ultraman, were two old-fashioned portable televisions, one on top of the other, playing animated shorts. Another amusing touch was an old coin-operated candy machine. For 100 yen you would receive a numbered ball that you could turn in at the desk for a Murata souvenir. The artist himself was there and autographed our souvenir with his name and one of the stars of his animated shorts: handstand boy.

There was a nostalgic feel to the installation inside the gallery. On an old bookshelf, several old-fashioned small televisions were tucked side-by-side with books on the shelves. Each little screen was playing a different image. Two old church pews sat in front of the bookshelf, their backs to the televisions. On the floor in front of them was an unusual piece of art involving model houses and a huge tongue lolling out onto the floor. 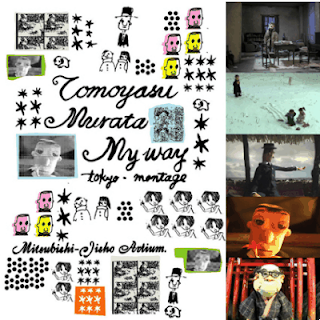 The walls of the gallery featured photographs on one side and paintings and illustrations on the other. The photographs were all old black and white snapshots that had a cut-out of a white cloud-like object that came down from the top of the photos, like slime in a B-Horror movie, and obscured the faces of the figures in the photos. Large, pillow-like versions of these clouds were also liberally placed about the room, most hanging from the point where the wall meets the ceiling like snow hanging over the eaves of a roof.Upstairs, one could view a selection of short animated films directed by Murata. As in the gallery downstairs, the animated shorts demonstrated a wide range of methods. Murata has done a series of stop-motion puppet animation shorts called the My Road Series. There is a European feel to these shorts, particularly in the style of the main protagonist’s apartment. The main protagonist, a pianist, is suffering from some kind of a loss, possibly his partner, and emotion and mood is conveyed through character movement, music, sets, lighting, and other special effects such as winds blowing and sound effects. Murata’s films have no dialogue, but he seems to work in collaboration with musicians and composers.

Murata also dabbles in cel animation and computer animation among other techniques. Tokyo Montage, for example, combines a wide range of techniques in a style that reminded me of the experimental work of Norman McLaren. Although the My Road Series has a melancholic feeling to it, most of his films do not take themselves too suriously. One motif found in almost all his films is the butterfly, a creature that I feel captures the beauty and playfulness of Murata’s work.