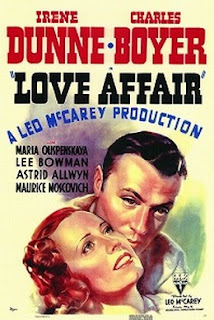 I was prepared to fall in love with Leo McCarey’s 1939 Oscar-nominated romance but in the end found myself disappointed. Charles Boyer has a lot of charm (who can forget his chilling performance in the 1944 George Cukor version of Gaslight when he does his best to make Ingrid Bergman believe she’s insane!) and finesse as an actor. Boyer was one of the few actors of his generation in  with a pronounced accent who demonstrated great versatility in his performances. He’s terrific in Hold Back the Dawn (Litchel Liesen, 1941) opposite Olivia de Havilland and Paulette Goddard and he has a fascinating chemistry with Bette Davis in All This and Heaven Too (Anatole Litvak, 1940).

Irene Dunne is simply lovely in her 1930s films like Roberta (William A. Seiter, 1935) and The Awful Truth (Leo McCarey, 1937). Despite her major star status in the 1930s, Dunne hasn’t remained an icon like many of her peers (Garbo, Dietrich, Crawford et al.). This is partly because of her early retirement from  in 1952, but it also due to the fact that so many of her films were remade into even bigger box office successes that get shown on TV much more often than the original films. For example, everyone’s heard of the Walter Lang musical The King and I (1956) with Yul Brynner, but hardly anyone goes out of their way to see Anna and the King of Siam (John Cromwell, 1946). Dunne also stars in James Whale’s 1936 version of Show Boat (1936) which features amazing performances, including Paul Robeson’s show-stopping rendition of “Ol’ Man River” but it often gets overshadowed by George Sidney’s 1951 Techinicolor remake starring Ava Gardner.

It didn’t take me long to realize that I’d seen one of the many remakes of this particular movie – An Affair to Remember (1957) starring Cary Grant and Deborah Kerr. An Affair to Remember was then memorably referenced in the Tom Hanks and Meg Ryan vehicle Sleepless in Seattle (Nora Ephron, 1993) which in turn seems to have inspired to the abominable Love Affair (Glenn Gordon Caron, 1994) starring Warren Beatty and Annette Benning. This latter film is only worth viewing if you’re interested in seeing Katherine Hepburn’s final appearance in a movie.

The realization that this film had been remade led to me making the inevitable comparisons between the two, which may have detracted from my enjoyment Love Affair. I usually watch Classical Hollywood films twice -- once just to immerse myself in the pleasures of the experience and then during the second screening I turn on the analytic mode and take notes. This film didn’t merit an immediate second screening, but it does have some really good moments. At first, my constant comparisons with An Affair to Remember didn’t affect my enjoyment of the film. Dunne plays an American woman called Terry McKay who meets French playboy Michel Marnet (Boyer) on board a ship bound for  from . During the course of their journey they fall in love and arrange to meet in six months at the top of the , but fate intervenes and delays their reunion. The witty repartee between Dunne and Boyer during the shipboard romance is superb. The set-up for the gags is convincing: everyone on the ship is interested in Michel Marnet’s love-life and the couple have to try to hide their growing fondness for each other from their nosy fellow passengers. I laughed out loud at a number of the jokes and gags. Sadly, the will-they-won’t-they sequences at the end of the movie is less compelling. Boyer had some moments where I really saw the emotion in his eyes but Dunne was a real limp fish in those final scenes. I kept having flashbacks to Cary Grant and Deborah Kerr in An Affair to Remember, who had me holding back the tears during those final scenes, not because of what they were saying but because you could really feel the emotion on their faces and in their eyes.

The original Love Affair is certainly worth viewing for all you fans of Classical Hollywood romances, but I wouldn’t recommend it as an introduction to someone unfamiliar with movies from this period.