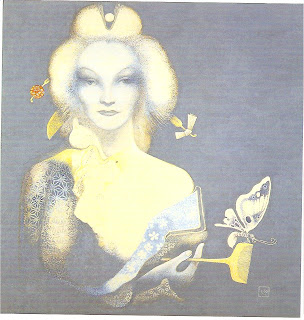 I saw an exhibition this week at the Yayoi Art Museum of the work of Eitaro Takanaka (竹中英太郎, 1906-1988). The Yayoi Museum specializes in magazine illustrations - particular pre-war illustrations. I have seen amazing exhibitions there of art from children's magazines of teh 1920s and 1930s where you could see the influence of style on animation that developed after the war.

Takanaka specialized in illustrations for thrillers, horror, and detective stories. In the 1960s and 1970s, he did some amazing, vibrantly coloured surreal paintings. He also did a series of paintings inspired by Marlene Dietrich, such as the one above. The poster below advertises a performance by Dietrich in Tokyo in 1974 (昭和49). I love the placement of the moth (detail follows at bottom). It says so much about Dietrich as a sensual, transformative creature. I would love to have it as a poster to frame on the wall! She would have been in her seventies, but Takanaka clearly sees her as still being at the peak of her powers of seduction. 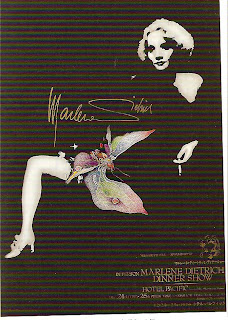 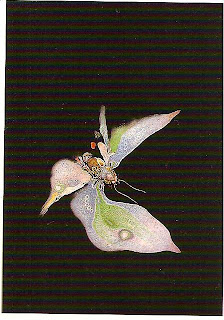 Der Blaue Engel is available on DVD in Japan with commentary footage from Nagaharu Yodogawa: