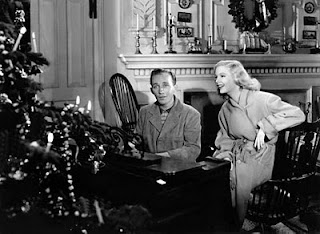 I picked this up on a whim at the video store even though most classic  films on DVD in Japanese rental shops are pretty bad pan & scan versions. In fact, they have often been put together so cheaply that you can’t remove the Japanese subtitles. This film is an old guilty pleasure of mine, despite some of the more disturbing scenes such as Louise Beavers being typecast as Mamie, and Bing doing a black-faced  routine.

The film was directed by musical veteran Mark Sandrich, who helmed at least half of the Ginger Rogers/Fred Astaire films including The Gay Divorcee (1931), Top Hat (1935), Follow the Fleet (1936), Shall We Dance (1937), and Carefree (1938). It features Irving Berlin’s songs and it is famous for debuting the song ‘White Christmas’. The plot consists of typical nonsensical musical fare: Bing Crosby and Fred Astaire star as Jim Hardy and Ted Hanover. Along with Lila Dixon (Marjorie Reynolds), they form a song and dance team whose running gag (on- and off-stage) is that Jim can sing but he can’t dance and Ted can dance but he can’t sing and Lila has trouble deciding which man she loves more. To swallow this rivalry you of course have to forget that Fred Astaire was actually a terrific singer. Some of my favourite renditions of Gershwin tunes were done by him (Imagining that Bing can’t dance is a pretty easy feat though). The Jim/Ted (Bing/Fred) rivalry is captured eloquently by the number “I’ll Capture Your Heart” in which each man claims that he will be successful in love because of his talents. In the end, Lila chooses Ted, and Jim sets off, tail between his legs to live as a bachelor farmer in . He then comes up with the brilliant, if unlikely, plan to turn the farm into an inn that is open only on national holidays (hence the title).

But this is a musical, and no one cares about logistics in a musical. Jim ends up hiring aspiring actress and singer Linda Mason (played beautifully by the under-rated Marjorie Reynolds, who apart from this film is only remembered for her role on the 1950s television series ‘Life of Riley’) whom he of course falls in love with and steadily wins over with his swoon-some crooning (it is Bing Crosby after all). Ted turns up drunk on Christmas Eve because Lila has ditched him for a  millionaire and proceeds to dance a spectacular number with Linda.  legend has it that Fred Astaire really did get drunk on bourbon for this number. The crowd at the  is wowed but Ted was so drunk he doesn’t remember what the girl looked like (and Jim’s not about to help him for fear of losing Linda). Ted’s manager Danny Reed, played by the talented character actor Walter Abel, came to the party late and only saw what the young woman looked like from behind. This sets up a great gag for the New Year’s party at the  where Ted dances with girls while Danny checks them out from behind and they get themselves in a whole passel full of trouble including this amusing exchange:
Man: “Say, what is this? A Daisy Chain?”
Ted: “We’re just looking for the back of a girl we don’t know.”


In spite of a few flubs along the way, including the aforementioned racism which was sadly par for the course in films of this era as well as pretty dire musical numbers for Lincoln’s birthday (poor Lousie Beavers had to sing the cringe-worthy line: “Who was it set the darkie free? Abraham!”) and ’s birthday (which will in all honestly leave you squirming in your seat), the film is a fun viewing overall. I love the numbers “Be Careful, It’s My Heart” (despite a few obviously bad lines like “it’s not a watch you’re wearing it’s my heart” WTF??? it is accompanied by a beautiful dance number), ‘Lazy’, my personal favourite ‘You’re Easy to Dance With’, and of course the Oscar-winning song ‘White Christmas.’ Fred Astaire’s Fourth of July number, ‘Say It with Fire Crackers’ is pretty enjoyable viewing. It’s a wonder Fred didn’t lose a leg during the filming of it though. It looks like they used real firecrackers.
The rapport between Bing and Fred is great and it’s a shame that they didn’t make more films together.Their only other film together was another Sandburg film, Blue Skies (1946), which was pretty forgettable apart from the title song and Fred performing ‘Putting on the Ritz.’ It’s not particularly surprising that Bing and Fred didn’t make more films together though as this film is the first time since Roberta (1935) that Fred has had to take second billing (and in that case it was to a woman – the lovely Irene Dunne). I have read that Fred Astaire was offered the Danny Kaye part in White Christmas (1954) but that he turned it down. A wise decision, as I don’t think that role would have suited Astaire. On the topic of White Christmas, I must mention that I have always thought that they recycled the sets from Holiday Inn when they made White Christmas, even though it was made 12 years later because the similarities are striking. Someone on the Internet Movie Database seems to agree with me, I really must look it up in a more reliable source at some point as this is a point that bothers me everytime I watch those two movies.
This film is fun viewing not just for the musical numbers but because of the snappy dialogue and terrific gags.  Some of my favourite lines include:

Apart from the condescending portrayal of African Americans in this film, the only other thing I would have changed as a director would have been to give the two leading ladies more chances to shine. It might have been just the thing to turn Marjorie Reynolds and Virginia Dale into stars instead of supporting players.Fortunately that mistake was remedied in White Christmas, but I’ll save singing the praises of Rosemary Clooney and Vera-Ellen until December.

And yes, if you’re wondering, the Holiday Inn chain in  did name itself after this popular movie.

[if you click on the title of this blog you will be linked to Alan Vanneman’s article “Too Much Bing, Not Enough Fred” at Bright Lights Film and from whom I have borrowed the images for this blog entry. I enjoyed the article, though I must respond that one can never have too much Bing or Fred.]
Posted by Cathy Munroe Hotes at 7:00 am