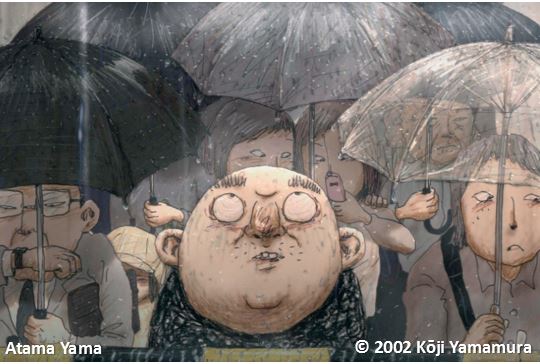 I was introduced to the animation of Koji Yamamura (山村浩二） by one of my students. His unique style has become famous through the many animations he has done for children. This film, Atama Yama (Mt. Head), is his first for adults and it was so successful on the international festival scene that it was nominated for an Academy Award.


The film is based on a rakugo

(国本武春), a musician and storyteller who is famous for pairing the shamisen with American bluegrass music. He also accompanies Atama Yama on shamisen. The story that unfolds is surreal in nature, but the animation renders it quite riveting. A stingy man living in a hovel of an apartment in Tokyo scavenges some cherries he finds lying on the ground. As he eats the cherries, he mutters to himself that it would be a waste to throw the pits away so he eats them as well. Soon, a cherry tree begins to grow from his unusually bulbous head. At first, he clips it away and saves the tiny green sprouts in a jar, but after a while, he can’t be bothered anymore and allows the cherry tree to grow. The story then descends into an even more surreal world as people gather on his head to celebrate hanami under the cherry blossoms. The people annoy him so much that he uproots the tree and throws it away, but the hole that remains fills with water on a rainy day and turns into a pond and people come again to swim in it. The ending is rather unusual and sudden, but I’ll let you find out for yourselves.


My student informed me that Yamamura has cited the influence of Estonian animator Pritt Pärn, Russian animator Yuri Norstein

. Personally, I was reminded of Terry Gilliam’s animation in Monty Python – perhaps because he often had things coming out of the heads of his animated figures.


The influence in Norstein is noticeable in the layering of images in Atama Yama. Norshtein uses multiple glass panes to give his images a three dimensional look. Unlike Norstein, however, Yamamura does use computers for the assembly of his films – possibly including the beautiful layered look – but it is clear that he mixes hand-drawn images with CGI. This allowed Yamamura to use the movement of the camera in interesting ways. The quality of light in Atama Yama was particularly stunning. In the opening scene in particular, the layering images combined with the use of light gives the impression that real sunshine is washing into the image.


Perhaps most impressive for me was the use of a point-of-view camera as the man eats the cherries. We hear the sounds of him chewing and see the plate of cherries through his eyes. When he reaches out his hand to take some more, and while he is chewing, the camera bobs up and down just as the head of the protagonist would. A brilliant sequence that had me feeling queasy at the man’s baseness.


I found myself chuckling at many points throughout the film – especially at the Japanese stereotypes that the story and animation poke gentle fun at – “Spring has come and the cherry blossoms are in bloom… the salarymen are also in bloom…. the office girls are also in bloom!” recites the narrator in that wonderful sing-song fashion of rakugo accompanied by the hilarious animation of the event by Yamamura.

If you would like to see the film, order it buy clicking on the icon below: