When I was a kid in the mid-eighties, my friends and I loved watching Jem and the Holograms on TV. My sisters and I bought the ‘Barbie’ dolls of the main protagonists, which came with cassette tapes of music from the animated series, and sang along and pretended that we were the Holograms or the Misfits (Roxy, Stormer and Pizzazz were much more exciting than the Holograms, whose names I don’t even remember anymore). Nana

, the NTV anime based on the manga by Ai Yazawa

(矢沢あい) appeals to the latent Jem fan in me. The anime debuted in the spring, but I have only just started watching it. I have been reading the first manga in the series (I think Yazawa-san is up to book 16 or 17 already… it started back in 2002) at a snail’s pace since the summer as a way to improve my Japanese.

Marketing for the live action movie of the same name, Nana (Kentaro Otani 大谷健太郎, 2005) and the accompanying pop songs have been everywhere this past year and I have been fascinated by the depiction of the two main protagonists in the advertisements – two young women who meet on the train for Tokyo who discover that they have the same given name, Nana (though written differently), and are the same age, 20. When I saw the DVD of the debut episode for sale at our local convenience store for 707 yen (‘nana’ can also mean 7 in Japanese and the girls end up sharing apt. 707 on the 7th floor of an old Western-style building) I bought it on a whim and can now officially proclaim myself hooked by the series.

Like Jem, the storyline of Nana has two competing bands Black Stones (BLAST ブラストis their nickname) and Trapnest (or Toranesuトラネス). Unlike Jem, this is not a simple battle of the bands story. Nor is it a story about a conflict between the two Nanas. Instead, I was pleasantly surprised to find a complex coming of age tale about two young women who go to Tokyo with very different ambitions and learn a great deal about themselves and each other through the ups and downs of their love lives and careers. Episode 1 seems to have been designed as a teaser episode that starts at the point when the two Nanas meet for the first time and decide to live together. Episode 2 (which I also plan to review) takes us back to where the manga begins and gives us a bit of backstory on both of the young women.

Nana Komatsu (小松奈々) is the kawaii shoujo, the stereotypically super-cute girl with big round eyes and a round face who is the typical protagonist of shoujo manga. Shoujo (少女) means ‘girl’ in Japanese but the term is also used in English to refer to this genre of manga as a whole or also to a certain type of female protagonist. This Nana has her hair dyed a lighter shade (it often looks blonde in the anime), dresses stylishly but conservatively, talks in a high-pitched voice and is very eager to please. Early on in the girls’ relationship Nana Osaki observes that Nana Komatsu is very much like a puppy dog: eager to please but needs a lot of attention. She gives her the nickname Hachiko (ハチ公) after the famously faithful dog whose statue at Shibuya station is a popular meeting place. Her friends also abbreviate the nickname to ‘Hachi’ which means 8 in Japanese.

Nana Osaki (大崎ナナ) is the kakkoii shoujo (かっこいい少女) or super-cool girl. Episode 1 shows Hachi to be in awe of Nana and emphasizes their differences (their similarities in terms of goals, insecurities, etc. will reveal themselves in later episodes). Where Hachi is talkative, Nana is quiet. Hachi wears pinks and pastels while Nana wears black. Hachi wears a modest amount of jewellery while Nana sports lots of rings, several piercings and even a tattoo (very uncommon in Japan as tattoos are associated with the yakuza – many public baths have signs out front saying that people with tattoos are not admitted) of a lotus (we find out its meaning later). Much to the envy of Nana, Hachi comes from a warm-hearted, small-town family and has two sisters. In contrast, Nana never met her father and her mother abandoned her to be raised by her grandmother when she was only four. Since her grandmother passed away, she has had to support herself.

The biggest contrast is their reasons for coming to Tokyo. Hachi is coming to follow her boyfriend and other friends there and seems to have no ambitions for herself other than romantic and domestic bliss -- as testified by the fact that she spends her first day in Tokyo cleaning Shoji’s apartment and making him dinner instead of going sight-seeing or looking for a job. Nana is coming to Tokyo to try to prove herself as a punk rock singer by making it big in the music industry and her love life remains a mystery in this episode. The girls have been brought together by fate, but they also seem to be drawn to each other by a kind of mutual attraction. The anime really emphasizes this through the romance of the setting – I know there is a theme of the number 7 but there is no way an apartment that “広い” (spacious) could be had in the Tokyo area for only 7万 (less than $700 CAD / €500 a month)!!! Even if it is an old building (Hachi says that it was built before she was born, which is really old to young Japanese people) without an elevator.

I must admit to being seduced by the hyper-romance of anime though – the softly falling snow, the idealized mise-en-scene such as the washed-out look of their apartment with it's backlit window, and so on. The attention to detail and realistic touches are stunning in many sequences. When Hachi’s keitai (cellphone) buzzed at one point, I actually checked my own keitai because to see if I had a message because it sounded exactly the same! I am looking forward to watching the rest of the series and will report on it here. I plan to buy the DVD of the next episodes this week. So far, I am quite fascinated by the depiction of the Nanas. Hachi is a character that most teenaged girls can identify with – dreaming of romance but not really sure about what she wants to do with her future. Nana, on the other hand, is the brave, rebellious girl that young women wish that they could be more like. From what I have read about the series on the internet (I have discovered that there is quite the buzz about this anime on English and French blogs), I have a feeling that the characters are about to get a lot more complicated in the common episodes.

Click on icon below for details on how to purchase episode one on DVD (no subtitles): 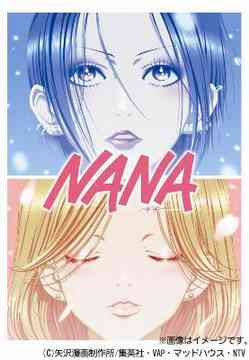