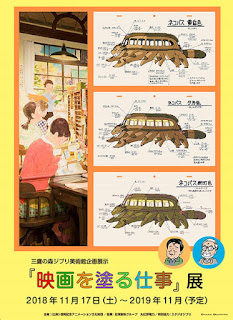 The current exhibition at the Ghibli Museum in Mitaka examines the “integral role” of colour as a form of expression in the films of its founders, Isao Takahata (高畑勲, 1935-2018) and Hayao Miyazaki (宮崎駿, b. 1941). The exhibition highlights the techniques used to ensure that even a limited range of colours “can give characters a real sense of vitality and even convey their emotions.” This is something that the exhibitors contrast with the current mainstream digital colouring and computer animation, emphasizing “the wisdom and ingenuity of Studio Ghibli staff who spared no effort to respond to the ever-increasing demands of the directors while working within the limitations of animation paint.”

Takahata and Miyazaki, were steadfastly committed to their philosophy of “carefully depicting characters and their everyday life and giving them a reality that is different from live action films.” For them, this was the crucial to winning over the hearts of their film audiences. During the process of film production, this meant the careful selection of particular scenery to represent reality, the use of lighting to depict time and weather, and the precise selection of colour to express minute details such as texture.

This exhibition aims to demonstrate the commitment to expression using colour by Takahata and Miyazaki. It showcases original cel drawings painted by the late colour designer Michiyo Yasuda (保田 道世, 1939-2016). Yasuda began working with Takahata and Miyazaki when they were at Toei Animation on projects such as Hols: Prince of the Sun (太陽の王子 ホルスの大冒険, 1968) and The Wonderful World of Puss 'n Boots (長靴をはいた猫, 1969) and followed them to Topcraft for the making of Nausicaä of the Valley of the Wind (風の谷のナウシカ, 1984). She then stayed on during the formation of Studio Ghibli and where she worked dedicatedly until her official retirement after the release of Ponyo (崖の上のポニョ, 2008). Despite her retirement, she was coaxed into working on Miyazaki’s The Wind Rises (風立ちぬ, 2013).

In 2011, Yasuda’s achievements were recognized with the Animation Lifetime Achievement Award at the Japanese Movie Critics Awards (日本映画批評家大賞) and with the posthumous Meritorious Service Award at the Tokyo Anime Awards in 2017. In an interview with the Los Angeles Times in 2009, Yasuda said “What I like best is when I am building up the colours in my head, thinking of how to get the tone worked out. Colour has a meaning, and it makes the film more easily understood. Colours and pictures can enhance what the situation is on screen.”

Ghibli Museum Special Exhibition: Painting the Colours of Our Films
三鷹の森ジブリ美術館「映画を塗る仕事」展
How to reserve tickets

This text has been adapted from the official press release of the Museo d’Arte Ghibli.
Posted by Tanuki Press at 4:55 pm