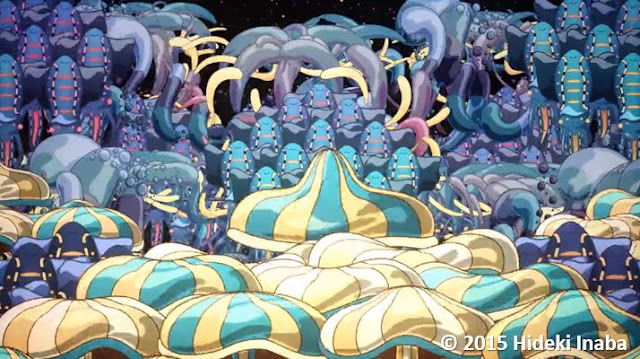 Hideki Inaba (稲葉 秀樹, b. 1988)’s Slowly Rising came to my attention because the film was part of the Jury Selection at the Japanese Media Arts Festival 2017. Inaba is originally from Ibaraki Prefecture but is now based in Tokyo where he works as a freelance video artist. He has had a lot of success in the past couple of years, participating as part of the filmmaking team that did the animated special effects for the Red Hot Chili Peppers’ Getaway Tour and having his work featured at many international festivals and online media platforms.

Slowly Rising from kanahebi on Vimeo.


Slowly Rising is a music video for the Dutch artist formerly known as BEATSOFREEN, now using the moniker Stan Forebee (Beatsofreen is an anagram of this name). Forebee is based in Melbourne, Australia. He describes himself as a beatmaker and multi-instrumentalist who grew up immersed in jazz and classical music in a musical family in the Netherlands. In March, he released his debut jazz album Jazz Sessions and he promises another album in the near future.

On the Japanese Media Arts Festival Website, Inaba describes the music video thusly: “Under the sun that is the source of life, a single seed is born. Seeking light, the seed forms a group that gradually increases in numbers, then dies off. Another seed then grows in its place. The creator brings a cel animation touch to a story that overlays human relations in the corporate world with the rise and fall of living organisms.” (source).

The film begins as simply as the music, with plant-like fronds waving against a starlit, other-worldly galaxy. As the music becomes more layered, the variety of imaginary organic creatures multiplies – some resemble plants, others pulsing sea creatures, and still others flying insects. They fill the screen like a colourful, ever-changing kaleidoscope. The result is a hypnotic video as entrancing as the music itself.