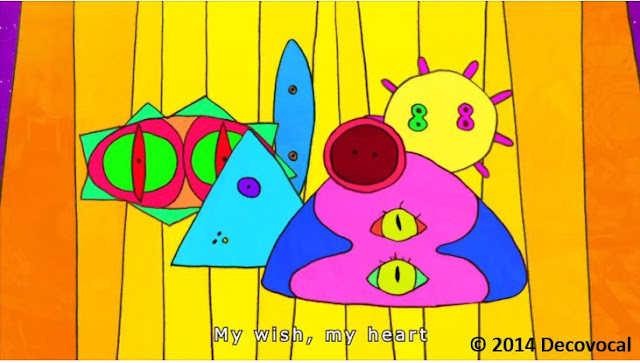 How Low Sympathy (ハロウシンパシー) is a music video for the three-piece Japanese band Scenarioart (シナリオアート). The band is from Kansai and features Kōsuke Hayashi (@kosukedao) on guitar and vocals, Kumiko Hattori (@drumkumiko) on drums and vocals and Yakahisa Yamashita (@yamapio) on bass and vocals. Their music demonstrates the influence of rock, electronica, and shoegaze pop. Their first single, Raincoat Man was released in 2013 and their single Sayonara Moon Town featured in the end credits of the popular anime series Boruto: Naruto Next Generations. The single How Low Sympathy can be found on their debut studio album Happy Umbrella.

How Low Sympathy is animated by the husband and wife team Decovocal (デコボーカル): Tomoyoshi Joko (上甲トモヨシ and Hiroco Ichinose (一瀬皓コ). I wrote about Ichinose and Decovocal in my last post about (read here), so for this post I will focus on the other half of the team. Like his wife, Joko also studied at Tokyo Polytechnic University where he was mentored by art animator Taku Furukawa (古川タク). I first wrote about him back in 2011, when my kids fell in love with his animation short Lizard Planet (read more). Joko has a remarkable ability create fantastic visual worlds using simple line drawing and computer colouring techniques. In addition to Lizard Planet, his film Buildings (2008) is clever and engaging.

This combination of originality of design and colourful aesthetic has led to a successful carrier in commercial animation design. In addition to music videos, Decovocal make animation for television and advertising.

Check out the work of Decovocal on their official channels:
Hiroco Ichinose
Tomoyoshi Joko
Decovocal