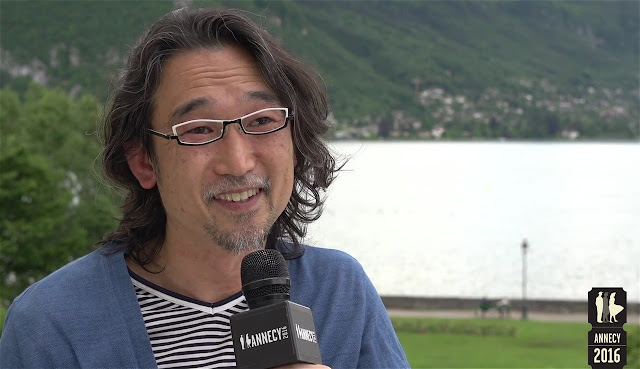 Annecy has just posted an interview with Shuzo John Shiota, President and CEO of Polygon Pictures Inc., who is attending at MIFA 2016 (Marché international du film d'animation d'Annecy / the Annecy International Animation Film Festival and its Market).  He is also on the jury of the short film competition at Annecy this year.  Shiota grew up in the United States and is a graduate of Sophia University in Tokyo.   He has been at Polygon since 1999 and has been president and CEO since 2003.

Tokyo-based Polygon Pictures was established in 1983 and is one of the oldest digital animation studios in the world.  Some notable anime works that they helped produce include Production IG’s Ghost in the Shell: Innocence (Mamoru Oshii, 2002), The Sky Crawlers (Mamoru Oshii, 2008, Oblivion Island: Haruka and the Magic Mirror (Shinsuke Sato, 2009) and more recently they co-produced Ronia the Robber’s Daughter (Gorō Miyazaki, 2014-15) with Studio Ghibli.  They create fully CG television series in collaboration with American companies such as Tranformers: Prime (2010-13), Tron: Uprising (2012-13), Star Wars: The Clone Wars (2008-14) as well as digital animation for films, video games, exhibitions, websites and smart devices.  Polygon also have their own original character properties such as Rocky + Hopper.  In 2013 they opened a joint venture studio in Malaysia: Silver Ant PPI.

Although most of their work is pretty mainstream, they do also occasionally support artistic projects.  One major case in point is the work of Kōji Yamamura.  The company’s first international co-production was Yamamura’s NFB film Muybridge’s Strings in 2011.

Polygon partnered with Netflix earlier this year to create a 13-episode anime series AJIN: Demi-Human (亜人, 2016) based on the seinen manga by Gamon Sakurai.  The second season is due out this fall.


The transcript of Shuzo’s interview follows, with asides and minor errors edited out.


MIFA: What are the biggest challenges facing the animation industry today?


Shiota:  The challenge is also a big benefit that we have been seeing in the past two years.  Because of the advent of the streaming video like the Netflixes, the Amazons, and the Hulus, there is suddenly a huge window of opportunity to show our work whereas before our genre, which is anime.  .  .  it was very difficult to find a place to show it in the international media.  But with the steaming video, we are able to produce shows and show them to many, many different countries at the same time.  So the challenge actually is that we have more than enough demand to create a show and there is now an opportunity to license the show for lucrative amounts of money. The challenge is actually how do we create the show facing the demand and how do we produce a show with these parameters.  It’s a matter of finding enough talent [and] finding enough interesting projects, because the opportunities are there.

MIFA:  How is your company addressing these industry changes?


Shiota: We are having more strategic relationships with publishers – Japanese publishers like Kodansha – to find properties.  We are coming up with ideas on our own.   The elementary [aspects] to these things aren’t changing, the challenge is to find enough talent, great talent, to help us produce the shows.  We are sourcing talent not just from Japan but from all over the world.  We have created a studio in Malaysia to offshore some of the production and to make it manageable within the schedule and the budget.  It’s more of how do we find enough animators, talented animators to help us produce the show.

MIFA: What are your expectations from this year’s MIFA?


Shiota:  I’m here mostly to connect and network.  And also to meet up with people that I have known and try to exchange information.  Like I said, the medium is changing extremely rapidly and so it is very dynamic and so there are many more opportunities to work together as there weren’t [before].  I am try to find, to connect, and to digest as much information as possible and try to find new opportunities.  .  .  For me it’s mostly trying to find new ideas [and] people to work with because in terms of distribution we’re in a pretty good place.  For me, like I said, we’re trying to find new talent, new people to work with, to help us produce new shows.  .  .  It’s my first time here.  It’s amazing.  This is crazy.