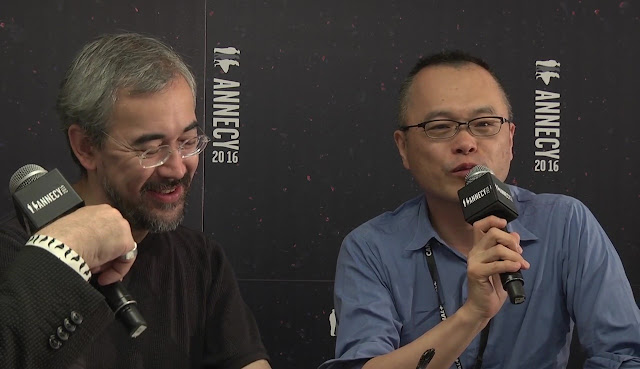 Kōji Yamamura is in Annecy with his latest animated short “Parade” de Satie (サティの「パラード」/ Satie’s “Parade”), which was made in honour of the centenary of Erik Satie’s ballet Parade (1916-17) and the 150th anniversary of Satie’s birth (1866-1925).  The film soundtrack uses a recording of “Parade” by the Dutch indie jazz band, Willem Breuker Kollektief.

All of the filmmakers in the Annecy shorts competition are invited to a breakfast chat with the festival’s artistic director Marcel Jean called P'tits Déj du court (Shorts + Breakfast) to “talk about the genesis of their films” as well as “the development and the artistic and technical choices.”  Yamamura’s breakfast occurred Tuesday, June 14th.  Ilan Nguyen was on hand to interpret between French and Japanese for Yamamura.  The following is an approximate English translation of the proceedings.

Jean: I now invite the director of “Parade”, Kōji Yamamura, to join me. [applause]  So, Erik Satie.  .  . what is your relationship with this great composer?

Yamamura:  I had a CD of Satie’s music.  I have known his music since I was about 20 years old.  There was an exhibition about Satie about 30 years ago and I got a copy of the catalogue.  In it I learned a great deal about Satie as a person.  For example, that he had lived alone in Arcueil in a small apartment that no one ever visited.  After his death they discovered many things in his apartment, including thousands of cards that he had written and drawn on.  These cards had texts that were ironical.   This later, lonely period of Satie’s life interested me a lot. 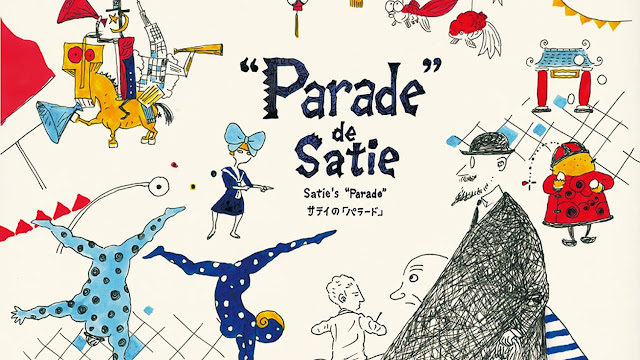 Jean:  “Parade” is of course by Erik Satie, but Pablo Picasso and Jean Cocteau where also involved in the work.  Did you consider at all including them or did you want to concentrate on Satie?
Yamamura:  I very much concentrated on the character of Erik Satie.  I wanted the work to express the life of Erik Satie, and for “Parade” to be one element of the larger picture.  Finally, I wanted to concentrate on the music of this ballet itself.  As the music plays, I integrate certain elements of the life of Satie.  There was a certain distance between Satie and Cocteau.  From the start, Satie did not fully appreciate Cocteau’s script.  Picasso and Satie started getting along well and Cocteau became a bit of a third wheel.  In the end, Satie did not remain faithful to the original text of Cocteau.

Jean: You rightly say that you are aligning yourself with the music of Erik Satie, so is the length of your film predetermined by the length of the music?  Also is the music not also a train of thought?

Yamamura:  Initially, my hope was to reproduce in animation the first public performance of “Parade” in 1917. As it is a ballet, the length of the music would be already set.  The information about the original performance was pretty sketchy, so I used some of these fragments, these choreographed elements and used my own ideas. . . . . . [I didn’t catch all of this part]

Jean: “Parade” is a ballet and a ballet is a dance, “the art of movement”.  When I watch the films of Kōji Yamamura, there is an approach to movement that is very stylised and very free, and I ask myself, at what point, in ‘Parade’ but also in general,  does dance or other arts of movement act as a reference?

Yamamura: Obviously, the elements of movement, dance in particular, are the important elements for me.  As we know, in animation the animator creates a choreography of movement in a certain sense.  Of course, there exists, in this case in particular, different ways of expressing the internal.  But when one compares the relationship between the ballet and the music on the one hand and the animation and the music on the other, there are notable differences.  It’s a question of corporeality.  The ballet is restricted by the corporeality of the human body, but animation is free of this.  It is not constrained by the limitations of the body.

Jean: [to the audience] Do you have any questions for Kōji Yamamura?

Audience member:  Thank you so much for bringing us films that tell us a lot about culture.  First you brought us a film that told us the story of Muybridge, and now a story about Cocteau and Satie.  My question actually does not pertain to your film but to the film that we saw last night, The Red Turtle [the French-Japanese-Belgian feature film co-produced by Wild Bunch and Studio Ghibli].  Everyone was agreeing that Michaël Dudok de Wit was influenced by Japanese art.  What did you think about this film? 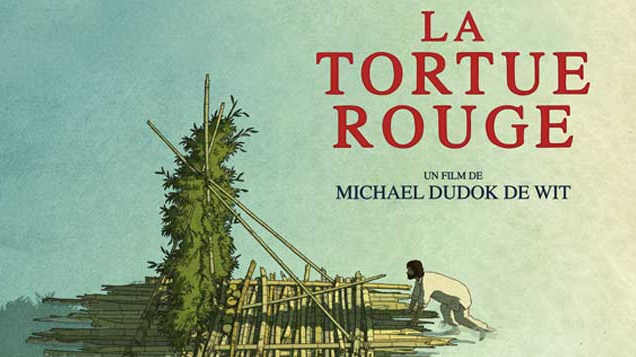 Yamamura: Well, it’s a bit difficult to publicly state my opinion on this subject.  I will answer quite frankly, I think this material would have been more appropriate as a short film.  It’s not quite obvious why it would have been done as a feature.

[There were two more audience questions before the session wrapped up.]