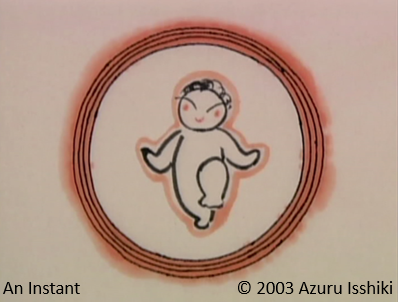 Azuru Isshiki’s 2003 animated short An Instant, pares the art of animation down to its essentials: a series of images drawn in paint on paper.  It begins and ends with a small dot, but in-between Isshiki explores the full range of expression possible with just simple animation tools.  The film consists of just black and red paint on a variety of different papers.  Dots, lines, and spirals dance across the screen, as does a cheerful female figure.  It is an exuberant and life-affirming piece in the same vein as Norman McLaren’s Boogie Doodle (1940).

The animation is accompanied by a dynamic percussive score performed by Kyōichi Satō (佐藤強一, b. 1962).  It was first shown as a silent film accompanied by a live impromptu music performance in 2003 at an animation event called "INTO ANIMATION 3" organized by JAA (Japan Animation Association).  After this event, the music was recorded and added to the film.

An Instant screened as part of the programme A Wild Patience – Indie Animated Shorts by Women at Nippon Connection 2016.    It appears on the ASIFA-JAPAN DVD, vol 1, which can be used for non-profit screenings celebrating International Animation Day (IAD) held by ASIFA national groups.

Azuru Isshiki (一色 あづる, b. 1949) is an animation artist from Tokyo.  She worked at Toei for five years before going freelance.  She is a member of the animation group G9+1 and was a participant in Kihachirō Kawamoto’s collaborative work Winter Days (2003).