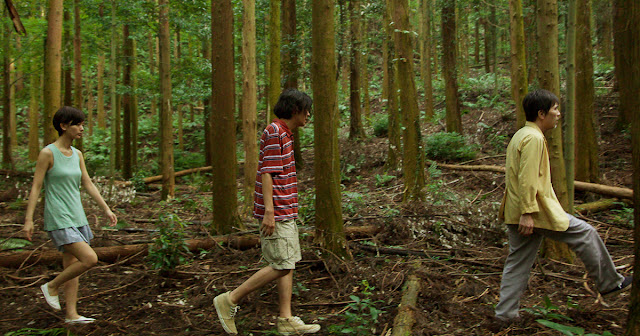 Takeo Kikuchi’s debut feature film, Dear Deer (ディアーディアー / Diā Diā, 2015), won the Nippon Visions Jury Award at this year’s Nippon Connection.  The film was recommended to me by festival curator Atsuko Morimune because the opening sequence features animation by Atsushi Wada, who was my NC animation guest in 2012.

A young woman (a much too short cameo by the wonderful Rinko Kikuchi) is alone in the exhibition space of a local museum at closing time.  She presses a button several times in order to watch a video installation but it does not play.  A few moments after she walks away in frustration, the film plays for the cinema audience.  Animated with Atsushi Wada’s signature style, the short film tells the story of the local Ryōmō sika deer (sika deer are known as shika in Japan), a type of sika deer famous for its antlers, which used to be found in the Ryōmō district of Tochigi Prefecture.  The film claims that the deer used to be prolific until invading foreign species, industrialisation, and hunting drove them into extinction by the Second World War.  Fifty years later, three local children spotted a deer and took a blurry photograph of it.  The people of Ryōmō celebrated this sighting, but as no Ryōmō deer have been spotted since, many believe it to have been a different species of deer (see note at end of review for deer facts). 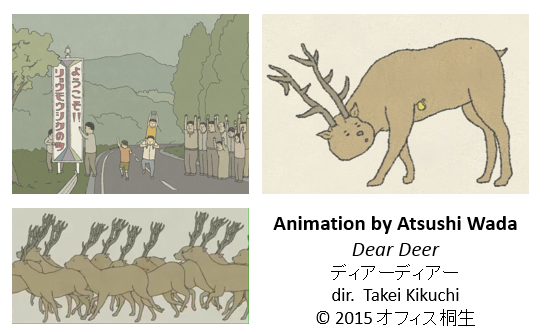 The story begins twenty-five years later when the three siblings who spotted the Ryōmō deer reunite in their hometown because their father is dying.  The eldest son, Fujio (Kōji Kiryū), stayed at home to run the family business but the economic downturn and his father's hospital bills have left him burdened with debt.  The second son, Yoshio (Yōichirō Saitō), has lived away from home for a long time and is jobless and struggling with mental health issues.  The daughter, Akiko (Yuri Nakamura), has also lived away since leaving school and is trying to divorce her husband.


This family reunion is fraught with problems as each sibling is in turn confronted with issues that they have avoided for much too long.  Fujio is under pressure from a local developer to sell his land to make way for a shopping centre.   Fujio knows he cannot save the business and he needs the money to pay his bills, but he is under pressure from the community not to sell his father’s factory.

Although his family seems to think that he is mentally ill, Yoshio’s main problem seems to be an inability to take responsibility for the mistakes he has made in his life.  This issue manifests itself in the form of an incident that occurs when Fujio lets Yoshio take the wheel of their father’s car.  His neglectful driving leads him to run over a dog.  Rather than trying to find its owner and apologize, Yoshio buries the dog, and tries to cover his tracks with a series of lies.

Similarly, rather than using the time at home to come to terms with why her marriage has failed, Akiko throws herself back into a toxic high school affair.  As layer upon layer of the weaknesses of these siblings is revealed, we are hooked into the storylines by our curiosity to see whether or not the central characters have an epiphany about their lives, or if they will continue in a downward spiral.

The extinction of the deer and the disintegration of the family serve as metaphors for the decline of small towns all over Japan which are suffering because young people and businesses have moved to larger city centres.  The film was shot in the director’s home town of Ashikaga in Tochigi Prefecture and was produced by the lead actor Kōji Kiryū with his own production company Office Kiryu (オフィス桐生).

The most intriguing thing for me about this film is the fact that I identified more with the minor characters – Akiko’s underappreciated writer husband Seiichi (Yurei Yanagi) and the poor family who lost their dog – than I did any of the central characters.  I dearly hope Kikuchi does a sequel about the life of Akiko’s writer husband who cooks her a wonderful breakfast before walking out of her life to a future unknown.

On a final note: although the deer works as a wonderful metaphor within the story of the film, this is a fiction.  There is only one species of deer in Japan, so if Ryōmō has or had its own regional deer it would be a subspecies of the sika (cervus nippon) such as C.n.nippon.  In real life, the deer is not a very good metaphor for threatened species in Japan because deer and wild boar in Japan are a nuisance to farmers due to over-population.  Deer are overabundant in Japan because of a combination of conservation efforts, a reduction in hunting and the 19th century extinction of the native species of wolf.  The only subspecies of deer under threat are the Kerama deer (C. n. keramae) which are native to the tiny Kerama Islands of Okinawa.

Takeo KIKUCHI (菊地健雄, b. 1978) was born in Ashikaga, Tochigi Prefecture.  He is a graduate of Meiji University and The Film School of Tokyo (Eigabi).  He apprenticed under Takahisa Zeze before working as an assistant director for many years under various directors.  Dear Deer is his debut feature film.