In 1997 at the Mainichi Film Awards, Nozomi Nagasaki became the first woman to win the 1996 Noburō Ōfuji Award for innovation in  animation for her stop motion animated short Home Alone (るすばん/ Rusuban, 1996). Since then only one other woman has won the award: Geidai grad Onohana for Crazy Little Thing in 2014.

Home Alone is a stop motion animation that uses a mixture of cutouts, objects, and a puppet designed by Sumiko Hosaka (learn more).  The central character is an anthropomorphic kitten who is catlike in many ways, but is playing the role of a child left home alone for the day.   The kitten seems quite bored at first, alone in the house but for a chicken with a ball and chain (?!).    The kitten plays with a toy mouse, makes a face at a portrait of his family (his mother makes a face back startling him) and reads a storybook unenthusiastically.  The only sounds are those made by the cat and a clock ticking loudly on the wall. 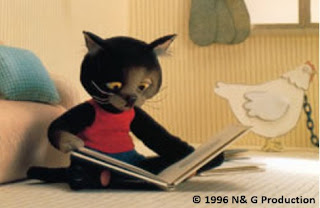 Suddenly the clock increases in tempo and falls from the wall, and the objects in the room come to life.  The books seem to attack the cat, his pillows transform into clouds and fly away.  His two-dimensional parents jump out of the family portrait to join him and his boots and raincoat come to life. The room fills with an ocean complete with flying fish. An alligator eats the sun up on the ceiling.   It is a chaotic and surreal scene.  The frenetic nature of the scene is emphasized by a percussion soundtrack.  Then just as quickly as the room came to life, it all disappears again leaving the kitten alone with the ticking clock.

Although the animation style is not mainstream, the film is aimed at a child audience.  According to N+G Production’s website, their aim is to “try to make sensitive animations,” and they “do not want to bombard children with too much noise and too many images.”  The film seems to be deliberately not kawaii.  I don’t know that the film is “sensitive” by my understanding of the term.  In fact, with its unusual imagery and sound effects, it has much more in common with 19th century tales for children than those of the late 20th century.  By that I mean that it unsettling in the manner of the original tale of Alice’s Adventures in Wonderland (1865) by Lewis Carroll in contrast to the Disney-fied (Alice in Wonderland, 1951).  Although nothing really scary happens, I would hesitate to show the film to a young child because of the eerie, almost nightmarish imagery.  The audience at Nippon Connection 2016 was amused by the absurdity of the film, laughing out loud at the unusual sound effects.

Nozomi Nagasaki (長崎希) was born in Tokyo and graduated from Waseda University.  In the early part of her career she worked as an animator for both Tadanari Okamoto and Kihachirō Kawamoto.   She has her own studio, N&G Production where she directs and animates stop motion using a variety of techniques including puppets, clay, objects and cutouts.   In addition to her independent animation Nagasaki has made animation for commercials, children’s television, movies, and video packages.  She directed a film about stop motion animation, The World of Handmade Animation Films (ハンドメイド・アニメーション映画の世界, 2001).    See her complete independent filmography.

Home Alone screened as part of the programme A Wild Patience – Indie Animated Shorts by Women at Nippon Connection 2016.    It appears on the ASIFA-JAPAN DVD, vol 1, which can be used for non-profit screenings celebrating International Animation Day (IAD) held by ASIFA national groups.