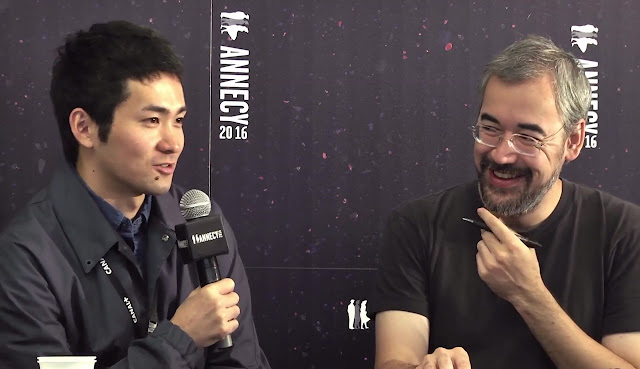 “Yoshiro Ishihara (1915-1977) was a poet of silence. He said that a poem is an impulse to resist writing. This is an attempt to seek out a landscape from his poems.” – summary of Datum Point

Ryo Orikasa’s latest short film Datum Point (水準原点 / Suijungenten, 2015) competed in the short film competition at Annecy last week.  It was Orikasa’s first time being nominated for this prestigious competition, which was won last night by the French animator Franck Dion for his NFB co-production The Head Vanishes (Une tête disparaît, 2016).  Datum Point has received much acclaim in Japan, winning earlier this year the Ōfuji Noburō Award for 2015 at the Mainichi Film Awards in January, as well as the Terayama Shūji Award at the Image Forum Festival 2016.  Last month at Animafest Zagreb, Datum Point won the Golden Zagreb Award for creativity and innovative artistic achievement.

After getting a degree in Education from Ibaraki University in his native prefecture of Ibaraki, Orikasa (折笠良, b. 1986) was in the second graduating class of the MA program in animation at Tokyo University of the Arts (Geidai) in 2011 where he made the project Scripta Volant (Writings Fly Away, 2011).  He currently lives and works in Montréal as part of the Fellowship Overseas Study Program for Artists by the Japanese Agency for Cultural Affairs.

All of the filmmakers in the Annecy shorts competition are invited to a breakfast chat with the festival’s artistic director Marcel Jean called P'tits Déj du court (Shorts + Breakfast) to “talk about the genesis of their films” as well as “the development and the artistic and technical choices.”  Yamamura’s breakfast occurred Saturday, June 18th.  Ilan Nguyen was on hand to interpret between French and Japanese for Orikasa.


The following is an approximate English translation of the French / Japanese proceedings:

Jean:  In each of your films you use text.  Text is at the heart of things – written text, handwritten – is at the heart of your work.  I would love it if you could talk to us about this interest that you have in words, and also in graphic denotations.

Orikasa:  Before these text-based works, I had made works that were more orthodox: characters [people with a narrative] drawn on paper.  Even in those animated works, I had characters that would keep a diary or the main character would, for example, be a novelist.  So even in these early works, writing played a role and I soon came to realize I had an interest in expanding upon writing as a visual motif. 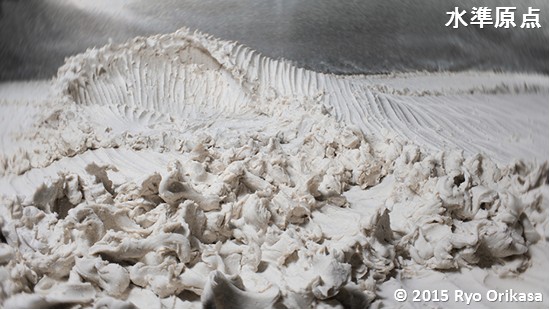 Jean: You have created a film that is truly a performance of technique.  I saw your previous film, and I believe this is the first time you have used modelling clay.  [Datum Point] is a film that is extremely impressionistic in the manner in which you have created movement – these waves have an energy that has been created through the manipulation of the materials.  I’d like you to talk about your relationship to your medium in this film, because one has the impression when watching this film that one is watching a true performance and that this must have been very difficult to achieve.

Orikasa:  The production for this film lasted one year.  I did all of the manipulation of the material [the clay] myself by hand.  As to the selection of the plasticine, as you rightly point out this was my first time using this medium.  The film is based on a Japanese poem.  I was interested in this film in the idea of a resistance to writing, of a resistance to something physical.  In order to convey this motif of resisting the physical, in this case the physical act of writing, it seemed to me that the plasticity of clay could manifest this resistance to the physical more effectively than the act of writing on paper.

Jean: Datum Point also had a very interesting and radical sound design.  Was the sound design created at the end of the animation process?

Orikasa:  The soundtrack was designed at the end of the animation process.   At first, I had a different concept for the sound in my head – a piece of music by a Japanese composer.  I was interested in the way the Japanese song expressed the idea of “the sea without water” which I felt suited my film exactly.  [The final soundtrack was composed by the Tokyo-based sound artist Shun Owada (大和田俊)].

Jean:  Are there any audience questions for Ryo Orikasa?

Audience member:  Fully stunning work.  .  .   I was talking with some other people – I’m from Germany – and they said it reminded them of [Buddhist] gardening very much, which was interesting for me to hear.  But I’m not sure, how would you approach this thinking?

Orikasa: Thank you for your question.  This was my first time to hear that someone has made this comparison.  It’s a very new idea for me.  I can only say that when I was making this film I was never conscious that such a correlation could be made, but I can see how one might make such a comparison.

Jean:  Thank you Ryo Orikasa and thank you Ilan Nguyen for the translation.