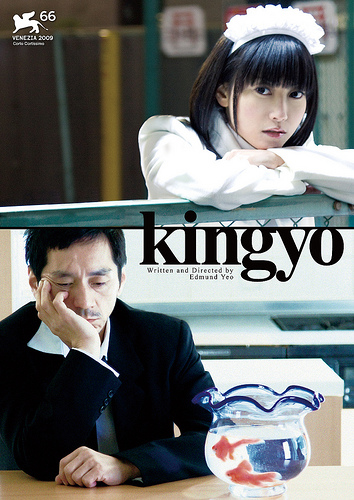 The young female protagonist of kingyo (2009) is dressed in a maid’s costume and wanders the streets of Akihaba offering maid tours of the district for ¥10,000.  Business is going slowly except for an odd request by a creeper, but then the woman (Luchino Fujisaki aka Rukino Fujisaki) encounters her former university professor (Takao Kawaguchi) who pays for a tour in order to enjoy an hour of her company.

Sensei looks tired and haggard and we soon learn that the pair were once lovers.  When the woman broke it off, she gave sensei the parting gift of a pair of goldfish which he took home and gave to his wife (Amane Kudo).  Affairs, even when both participants are single, more often than not create an emotional mess when they go sour but when a spouse is cheating it adds the pain of deceit and disloyalty into the mix.   Visual cues suggest that sensei loved both his wife and his lover and is torn apart by the fact that in caring for the beautiful goldfish his now recently deceased wife was unwittingly nourishing his memories of his former lover.  The man’s dilemma is eloquently expressed not only in the face of the talented performance artist Takao Kawaguchi playing the sensei, but also in director Edmund Yeo’s innovative use of the split screen technique. 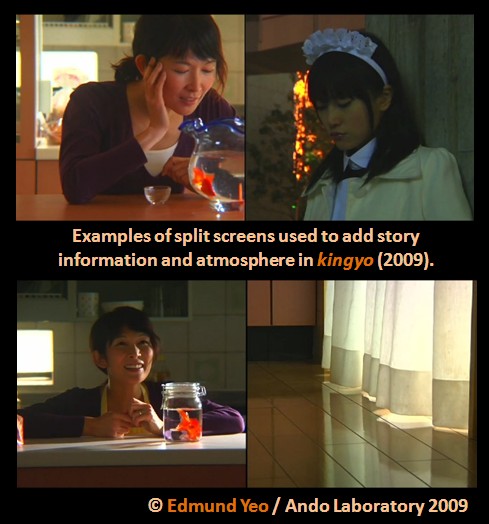 Split screen is a technique that goes back a long way in cinema history, but in my opinion it has not yet reached its dramatic potential.  It has been used for comic effect – as in the Rock Hudson/Doris Day romantic comedy Pillow Talk (Michael Gordon, 1959) and these days is often used to liven up music videos or concert footage.  A number of directors have used it successfully for dramatic effect such as Norman Jewison’s The Thomas Crown Affair (1968) and Bruce McDonald’s The Tracey Fragments (2007).  Yeo’s use of the split screen is similar to that used by Roger Avary in The Rules of Attraction (2002): showing two actions that are happening simultaneously.    It works both to build tension (such as the parallel actions of the sensei and the student in Akihabara) and to add atmosphere to scenes (two shots of same scene: the wind blowing the curtains gently as the wife observes the goldfish in their bowl. It also adds suggestive story information as in the brief split screen of the wife and the lover.

The most difficult section to shoot and edit must have been the dialogue between sensei and the student during his “tour” of Akihabara.  Yeo used a two camera set-up and it all looks very minimalistic and graceful, but having worked on film shoots in Toronto, I imagine it must have been technically very challenging to get the lighting and camera positioning right.

Like Love Suicides (2009), kingyo is another adaptation of a short story by Yasunari Kawabata.  The original story “Canary” (1924) featured canaries instead of goldfish.  Yeo informed me that he thought goldfish were more Japanese than canaries, and they certainly look stunning in close-ups.  The choice of fish reminded me of Kuniko Mukoda’s short story “Mr. Carp” which involves a former mistress giving her married lover a koi fish.  If I remember correctly, the starring fish evokes feelings of guilt on the part of the man.

It  is a beautifully shot and edited film.  Yeo has a delicate touch when it comes to creating atmosphere in his films.  I was particularly taken with the actors’ performances – especially Kawaguchi, who has an extraordinarily expressive face.  kingyo made the short list for best short film at Venice in 2009 and won awards at the Larissa Mediterranean Festival of New Filmmakers and the Eibunren Awards 2009.

This is the third in a series of reviews of the short films of the award-winning Malaysian filmmaker Edmund Yeo (b. Singapore, 1984).  A graduate of Murdoch University in Australia, Yeo has been based in Tokyo since 2008 when he moved there to pursue a Master’s degree at Waseda.  His films have received wide acclaim at international festivals including Cannes, Pusan, and Rotterdam.