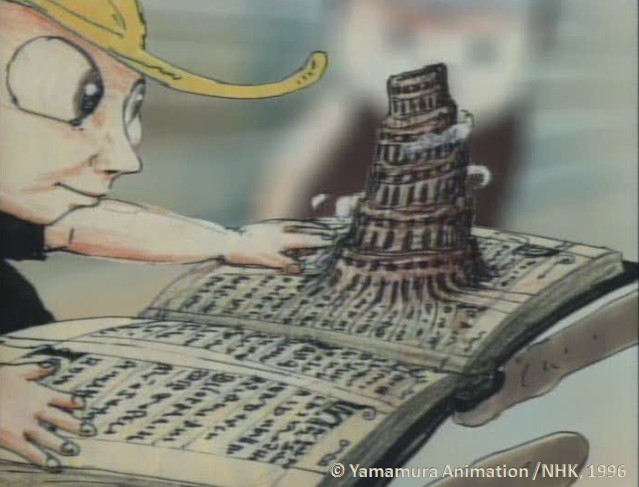 In many ways, Koji Yamamura’s animated short Bavel’s Book (バベルの本, 1996) marks the beginning of his maturity as an artist.  In terms of technique, Yamamura very early became a master of the craft of animating frame-by-frame by hand, but from Bavel’s Book on his films start to engage more deeply with literary and philosophical themes.  Inspired in part by the short story “The Library of Babel” by Jorge Luis Borges, Bavel’s Book is reminiscent of Michael Ende’s novel The Neverending Story (Die Unendliche Geschichte, 1979) in its depiction of the magical world of a book come to life.

One winter's day, a young boy and his little sister race to catch the bus but are disappointed when they miss it, despite the fact that an older bald man boarding the bus spots them approaching.  They sit down on the bench to await the next bus, panting from the exertion, and discover that the man has left a large leather-bound book on the bench.  Upon opening the book, the children are blasted with hurricane force winds that shoot out of it.  To the children’s wonderment, when the wind abates the ancient tower of Babel grows out of the pages of the book.  Peering inside a hole at the top of the tower, the boy sees a hexagonal library with hexagonal galleries.  This is Yamamura's interpretation of Borges’ famous Library of Babel: 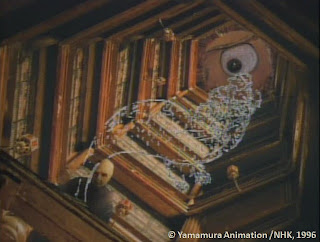 “The universe (which others call the Library) is composed of an indefinite, perhaps infinite number of hexagonal galleries.   .  .  From any hexagon one can see the floors above and below – one after another endlessly.  .  .  In the vestibule there is a mirror, which faithfully duplicates appearances.  Men often infer from this mirror that the Library is not infinite – if it were, what need would there be for that illusory replication?  I prefer to dream that burnished surfaces are a figuration and promise of the infinite.  .  .”

A miniature figure of the bald man is sitting at a large desk in the centre of the lowest level of library reading a book.  As he turns the pages, strange figures and shapes seem to come out of the book as if by magic, and just as mysteriously disappear again.  When the man leaves the library, the boy reaches down to grasp the tiny book.  Opening it he finds that he and his sister are transported to the sea where they fish from a pirate ship and drag their giant catch up the sand of a desert island.  They roast and eat their fish peacefully, unaware that danger lurks underneath them in the form of a giant sea monster.  Can the children use their imaginative powers to save themselves from the monster?  You must watch the film for yourself to find out!

The layers of depth to the story are mirrored in Yamamura’s trademark layering of the image using an animation table.  He employs a variety of techniques including drawn animation, cutouts, ink splotches – Yamamura is never a purist – he uses whatever materials he needs in order to get the visual results that he desires.  Bavel’s Book is complemented by an inspired soundtrack composed by the microtonal pop group Syzygys (Hitomi Shimizu + Hiromi Nishida), who frequently collaborate with Yamamura (Pacusi, Atama Yama, Kafka Inaka Isha, etc.).  The film brought Yamamura widespread acclaim including awards at the Chicago International Children’s Film Festival and the ’97 Seoul Animation Expo.  It was featured in the Panorama section at Annecy 97 and is one of ComicBox’s picks for the 30 Treasures of World Animation that did not make the Laputa 150 in 2003. 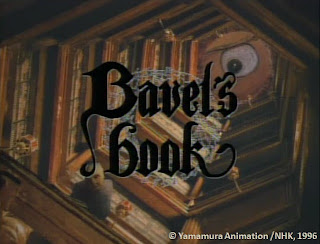 *** A note on the title:  In Japanese, “Babel” is written in katakana バベル.  The character ベ (be) is also often used to represent “ve” in Japanese as they do not have an equivalent to the “v” sound in their language.  For example Venezuela is written ベネズエラin katakana which would be rendered “Benezuela” in romaji.  Thus the “Bavel” in the official English title is likely the result of the word “Babel” being translated to katakana and back to romaji again. Confusingly, the compound ヴェ is also sometimes used for “ve” as in the city of Verona (ヴェローナ). Transliteration is not an exact science. ***
cmmhotes 2012
The film is available on the following DVDs:

Order from Japan via cdjapan:

Order from the USA:
Franz Kafka's A Country Doctor and other Fantastic Films by Koji Yamamura

Posted by Cathy Munroe Hotes at 12:22 am