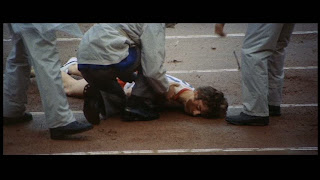 My Aunt Marian was on the Canadian team at the Tokyo Olympics in 1964.  Unfortunately, she had a bad fall during the early heats for the hurdles and literally knocked herself out of the competition.  I remember my grandmother had a scrapbook of the Olympics and the photograph of my aunt face done in the track appeared in numerous newspapers and magazines around the world. 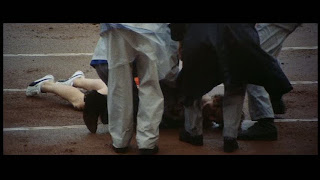 (東京オリンピック, 1965) on DVD back in 2002, I noticed a young woman wearing the maple leaf covered in mud being taken off the track in a stretcher during the Spectators and Spectacle sequence.  I called my Dad, who immediately ordered himself a copy of the DVD as well and called to confirm that it was indeed his sister. It turns out that my aunt did not know about the film, so it was a trip down memory lane for the whole family. The old family clippings were all in black and white, so this was the first time that I saw a colour image of my aunt at the Olympics. 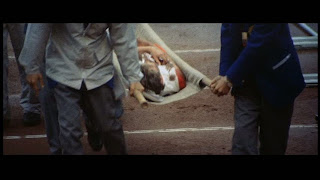 It may seem like an unfortunate event, but my Aunt Marian once told me that the disappointment was counterbalanced by the generosity of her Japanese hosts.  Apparently her hospital room was overflowing with gifts from Japanese people who felt sorry for the Canadian girl who took a tumble. 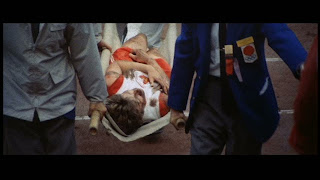 You can see my aunt's profile in the Richmond Hill Sports Hall of Fame and some reminiscences from family friend Orville on this message board.  Here she is featured in a Japanese magazine that I discovered in a museum in Kabutonuma, Hokkaido in July 2006 (click to enlarge): 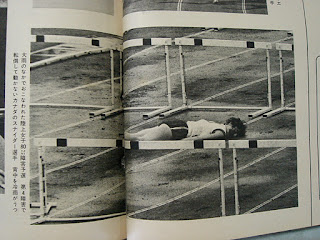 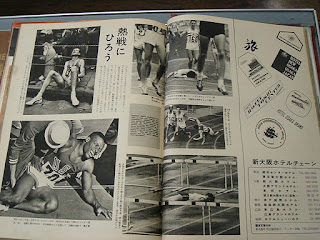 
The Criterion edition of Tokyo Olympiad is currently out-of-print:
Posted by Cathy Munroe Hotes at 5:51 pm