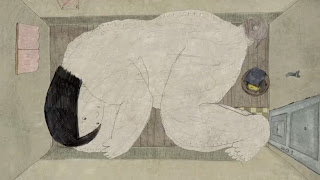 Some days, the hardest thing to do is to get dressed.

Aico Kitamura’s graduation film Getting Dressed (Fuku wo kirumade, 2010) charts the course of woman’s self imposed solitary confinement in her apartment over several days. Her room is bare but for the basic necessities, a growing collection of empty milk bottles, and a caged bird. The chubby, naked woman’s days fall into a rhythm of monotony. She sleeps, eats cornflakes, feeds her caged yellow bird, stares out the window at the busy street below, and sleeps again.
The naked woman’s days are punctuated only by the sound of traffic, the bird tweeting and her own sighs. Her mood is effectively captured by the plaintive sound of the contrabass (performed by Seiya Yoshida), part of an emotive soundtrack scored for the film by Miyako Matsuko. Fellow animator Saori Shiroki narrates the film, providing us with the woman’s interior monologue. The poetic narration reinforces the woman’s sense of entrapment in her one-room apartment.
I am used to repeating the course of life
Nothing is new now
I am an observer
And the outside world is neither illusion nor reality
The importance of sound is emphasized in a beautiful sequence in which the woman stands at the window listening and observing the traffic of humans and cars down below. The framing then moves to a close up on her ear sticking out of her hair. Her ear then metamorphosizes into the shape of the woman, still naked,   standing in the traffic of people and cars. This dream sequence elaborates upon the woman’s social anxiety as some of the people turn to stare at her.
Visually, Aico Kitamura’s film is densely textured like the films of her mentor Koji Yamamura. Her use of depth of screen and scribbles to add texture are reminiscent of his films Mt. Head (Atama Yama, 2002) and Franz Kafka’s A Country Doctor (Kafuka Inaka Isha, 2007). Thematically, Kitamura’s film reminded me of other animated films about the hardships of ordinary daily life like Wendy Tilby and Amanda Forbis’s When the Day Breaks (Canada, 2000) and Bruno Buzotto’s Life in a Tin Can (Una Vita in Scatola, Italy, 1967).
Getting Dressed is particularly fascinating for its use of the female body to express internal pain. This is emphasized in two sequences in which the sleeping figure of the woman begins to expand so that her body first collapses the bed, then envelops the entire room (see image at top). In the second sequence, her body continues expanding until it consumes the entire apartment building and even begins to take over neighbouring buildings.
Women’s bodies have been idealized and demonized as the subject of art since time immemorial. It is only in the past couple of centuries, however, that we have begun to get a sense of the multiplicity of ways in which women see their own bodies – and how that vision of the body and the self is impacted by the sufferings that the woman has experienced in her life. From Frida Kahlo

’s startling self portraits to Akino Kondoh’s depiction of her alter ego Eiko, the way in which women use the female body to express psychological states can be very provoking.
In Getting Dressed, a pant leg or shirt sleeve hangs out of the closet throughout – silently beckoning the woman to dress her corpulent, naked body and re-enter society. However, even when she runs out of cornflakes, the woman’s body still refuses to allow itself to be confined by clothing. She struggles through it only to be reborn, still naked on the other side.  The turn only comes when her nightmares cross paths with reality and her bird escapes its cage resulting in tragedy. The empty bottles and the bird seeds transform into multiple versions of the naked woman in a fetal position – multiple versions of herself which she needs to somehow stuff into her clothing so that she can face the world again.
I kept thinking of Maya Angelou’s I Know Why the Caged Bird Sings

while watching Getting Dressed. As in Angelou's memoir, the caged bird acts as a metaphor for the woman’s own situation in life. This motif is emphasized by the shots taken from the POV of the bird, which make it look as if the chubby naked woman herself is the one who is encaged. It is rare for a short film to capture so eloquently the daily struggles of a person suffering from acute depression and social anxiety.

Aico Kitamura's Getting Dressed demonstrates a level of maturity that is rare in a graduate film.  Her use of the female body to express inner turmoil is very sensitively done.  It is a thoughtful, moving and poetic film that leaves use with the promise of more exciting work to come in this young artist's future career as an animator.
About the artist:

A native of Kyoto, Aico Kitamura (北村愛子, b. 1985) discovered alternative animation as a graphic arts student at Kyoto Seika University. She went on to study animation at Tokyo University of Arts under Koji Yamamura and Ilan Nguyen. According to her website, she has been influenced by a wide range of film directors (Wenders, Tarkovsky, Ozu, Kitano, Kubrick, Chaplin, Buñuel), animators (Pärn, Patel, Leaf, Yamamura, Toccafondo) and artists (Cezanne, Magritte, Klimt, Bosch, Ogata, Arimoto). In addition to animation, Kitamura works as an illustrator and a graphic designer. She helped out fledgling indie label CALF by designing their website for them. She is currently storyboarding her next animated film which she hopes to complete by November.