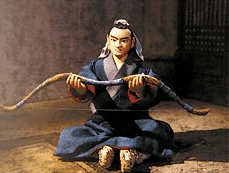 When my copy of Kimstim’s The Exquisite Short Films of Kihachiro Kawamoto came in the post last year, I was deeply disappointed to find that only 7 of the 11 shorts featured on Geneon’s DVD were represented. Missing from Kimstim’s collection are the 4 minute version of The Trip (旅/Tabi, 1973 – the long version is 12 min.), Self Portrait (セルフポートレート, 1988), To Shoot Without Shooting (不射之射/Fusha no sha, 1988), and Briar Rose, or the Sleeping Beauty (いばら姫またはねむり姫/ Ibara-Hime matawa Nemuri-Hime, 1990). The strangest omission was Self Portrait, as it is only a minute long and required no subtitles. With the others, I can only think that they must have blown their budget on their unnecessary English dubbing of The Book of the Dead (死者の書/Shisha no sho, 2004), which they released at the same time.

I finally got a chance to watch a decent version of To Shoot Without Shooting this week, and it has quickly become one of my favourite Kihachirō Kawamoto (川本 喜八郎, 1925) films. Kawamoto is of course most famous for his puppet animation, though he has dabbled in other animation types, and this 25 minute film is a definitive example of his ningyō jōruri (人形浄瑠璃) style animation. The ningyō (人形) have been exquisitely made by hand, with highly detailed sets, innovative cinematography, and a tight, philosophically intriguing storyline.

Ji Chang with his determination to be the best written on his face
Most Kawamoto films have strong storylines inspired by folktales, traditional theatre, or literature (both ancient and modern). With very rare exceptions, his work derives from Japanese and Chinese literature. The only exceptions I can think of are Briar Rose, although it is a Japanese writer’s interpretation of a Western fairy tale, and The Trip, which is partly inspired by Western art but at the same time is heavily informed by Buddhist philosophy. To Shoot Without Shooting is an adaptation of the story Meijin-den by Atsushi Nakajima (中島敦, b. 1909-42), which itself is derived from a traditional Chinese tale.

Chinese culture plays an important role in many aspects of Kawamoto’s career. Chinese language and folktales have strongly influenced the theatrical traditions that inform Kawamoto’s films. Furthermore, Kawamoto’s mentor, Tadahito Mochinaga (持永只仁, 1919-1999), had ties to the Chinese animation community, having worked there in the late 1940s and early 1950s. I would surmise that Mochinaga’s connections with China played a role in Kawamoto’s first grand-scale puppet theatre production in the 1980s of an epic Chinese novel Romance of the Three Kingdoms (人形劇三国志, 1982-84) for television. The project was a joint CCTV (China Central Television) and NHK production which resulted in 68 45-minute episodes. To Shoot Without Shooting also involves Chinese crew including music by the celebrated composer Jin Fuzai (b. 1942) and animation assistance by Sun Daheng.

Ji Chang and his wife on opposite sides of the loom

To Shoot Without Shooting tells the story of a young archer by the name of Ji Chang who aspires to become the greatest archer in the world. He seeks out the assistance of legendary archer Fei Wei, who can shoot willow leaves individually off of trees. Fei Wei first gives Ji Chang some skills he must master (sleeping with his eyes open and training the eyes to see very small details) then agrees to train him. Once trained by Fei Wei, Ji Chang is still not satisfied. His desire to become the greatest archer in the world controls him like a drug, leading him to attempt to kill his mentor in a duel. After this confrontation, Fei Wei sends Ji Chang to seek the advice of an elderly sage Gan Ying, who teaches Ji Chang that the ultimate goal for an archer is to learn to ‘shoot without shooting.’

This lesson comes from Buddhist teachings – a philosophy that informs many of Kawamoto’s films including The Book of the Dead (2005) and The Trip (1973). It occurred to me at the end of this film, that it would be rewarding to teach it together with anti-war and anti-nuclear bomb animations like Pica-don (ピカドン, Renzō & Sayoko Kinoshita, 1978) and Grave of the Fireflies (火垂るの墓/ Hotaru no Haka, Isao Takahata, 1988). This idea that the ultimate goal is the attainment of knowledge itself, rather than acting upon it has deep implications. When Ji Chang realizes this, he reaches a kind of Buddhist enlightenment. Kawamoto registers this through character expression. In the scenes leading up to the moment of enlightenment, Ji Chang’s face is set with a stoic expression of determination. When his egocentric ambitions lead him to challenge Fei Wei, the determination on his face becomes an ugly scowl. After his enlightenment, Kawamoto softens Ji Chang’s face. Within the storyline itself, the change in Ji Chang is seen and felt by all the villagers when he returns just by their looking onto his face.

Ji Chang with with a serene expression of enlightenment

As always with Kawamoto, the cinematography in To Shoot Without Shooting, is masterfully executed. He uses unexpected angles and camera movement that transform the film from merely puppet theatre into a truly cinematic experience. Some striking examples include opening the film on the main protagonists back and he strides towards a gate. The shot reverse shots between Ji Chang and his wife through the loom are perhaps the most memorable visually. The play of light and shadow in this scene is beautiful and it also demonstrates Kawamoto’s penchant for using a Japanese aesthetic in his framing: the balancing of positive and negative space and slightly off-centre framings. Every detail, from the painstakingly handcrafted sets and costumes to the overlaying of drawn animation on glass to depict smoke, has been carefully considered. Each frame from this film could stand alone as a piece of art in itself.

This film is available on Geneon’s DVD of Kawamoto shorts. The Book of the Dead is also available on DVD from Geneon with documentary extras left out of Kimstim’s release of the film (including a 47 minute Making Of documentary). The only drawback to Geneon DVDs are their lack of English subtitles.