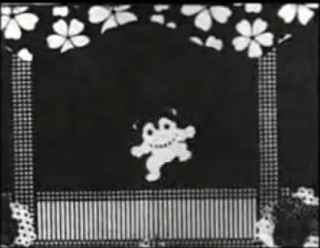 Chiyogami cutout animation
Mura Matsuri (The Village Festival aka Harvest Festival (1930) by animation pioneer Noburo Ōfuji (大藤信郎, 1900-61) is a deceptively simple film depicting a typical Japanese festival. It is an early example of Japanese manga-eiga (literally ‘cartoon movies’ as animation was known in Japan pre-1960s). As Japanese artists only began to create animation for public consumption beginning in 1917, it was still a relatively novel screening experience.
Japanese animators learned their craft through careful study of animated films imported from countries like France, England, and the United States. Some clues about Noburo Ōfuji’s screening habits can be gleaned from this short little film that runs at under 3 minutes. To begin with, I suspect that he has been watching Max Fleischer (1883-1972) films because he uses a “Follow the Bouncing Ball” technique with the kana that spells out the lyrics for the audience to read along. This gimmick is commonplace today, but it was an innovation at the time that began in September 1925 with My Bonnie (Max & Dave Fleischer) and was used extensively in the Fleisch brothers’ Ko-Ko Song Car Tunes of the 1920s and 1930s. Ōfuji puts his own creative touch onto the “Follow the Bouncing Ball” technique by having the ball interact with other objects related to the matsuri (festival) and at times substituting the head of characters in the matsuri for the ball 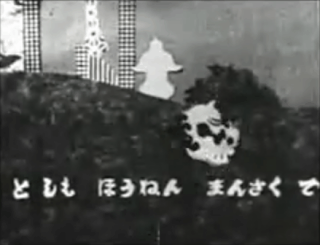 Innovative 'Follow the Bouncing Ball'... or Dragon head?
This type of read along song animation became a staple of Japanese television in the 1960s with programmes like the NHK’s popular Minna no Uta (Everybody’s Song) series which pairs animators with new songs. In many ways, Mura Matsuri is, along with other musical shorts from the period, a grandfather to the modern Minna no Uta classics.
It is clear that Ōfuji is primarily targeting this film primarily at an audience of children. The expectation of a child audience is indicated through the young voice of the singer Eiko Hirai, and through the use of kana in the song lyrics. Interestingly, the kana are used in a similar fashion to contemporary usage for young children: hiragana for common Japanese words and katakana for sound words like don don (ドンドン). I find this interesting because Nishikata, where I lived when I started this blog, is quite close to the Yayoi Museum & Takehisa Yumeji Museum (behind Tōdai, near Nezu Station). I saw a wonderful exhibition at the Yayoi Museum of children’s books and magazines from the 1920s and 1930s. Most of the material written for children at this time appeared to be written exclusively in katakana.

Chiyogami + Follow-the-Bouncing-Ball
At the time that this film was made, sound film was already all the rage in North America and Europe. The technology cam much later to Japan much mainly due to the benshi wanting to hold onto their jobs. Mura Matsuri is a film that straddles the silent and sound eras. The 16mm film itself is silent because it has no optic track. Instead, it is an example of a ‘Record Talkie.’ The song was recorded onto an SP record and played simultaneously with the film. For the digital restoration of this film they took the 16mm print and added the soundtrack from the SP record. The match between character movement and the tempo of the music is quite good.
Ōfuji is generally credited with being a pioneer of chiyogami (traditional Japanese coloured paper) cutout animation. While aesthetically, this gives films like Mura Matsuri a very Japanese look, the choice of chiyogami may have been more practical than artistic. When Ōfuji began making chiyogami cutout animation in the 1920s celluloid was prohibitively expensive in Japan. The average animator really didn’t have access to celluloid until the mid-1930s. Cutout animation is also a less labour intensive method of animation that drawing on celluloid.
Even when celluloid became more widely available, Ōfuji continued to make chiyogami films. In an interview with Armen Boujikanian at Frames per second, Akira Tochiga points out that in his post-war career, Ōfuji used coloured cellophane instead of celludiod: “. . . because of the materiality of the [cellophane] paper, [he had] to find ways to economize the motion of the characters. And this seems very associative with TV animation. As you may know, when Osamu Tezuka started the program Astro Boy, thirty minutes of animation were aired on TV weekly. It was pretty hard to make original pictures for thirty minutes amount of work per week.” The economy of character movement later became a staple of TV anime in Japan, with animators like Tezuka animating only 8 pictures per second instead of 24 in order to save on time and money.
With films from the 1930s, one always looks for evidence of war propaganda. Although Mura Matsuri actively promotes Japanese culture, it is not classed as propaganda. It was produced a year before the Japanese invasion of Manchuria and predates the widely acknowledged first official propaganda animation Momotaro’s Sky Adventure (空の桃太郎, Yasushi Murata, October 1931). According to the brochure for screenings at the Cinémathèque québécoise, the song was already popularly known through national school curriculum. When I watch old films I like to try to imagine the context in which they were originally screened. A light-hearted film, I imagine audiences singing and clapping along to Ōufuji’s delightful celebration of the harvest festival.
This film is available on DVDs offered by Digital Meme and Zakka Films.