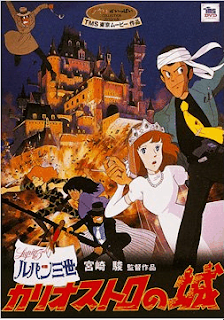 I finally got around to watching the only Hayao Miyazaki feature film that I had not seen while on holiday visiting my family in Canada. Based on a manga series by Kazuhiko Kato under the pseudonym ‘Monkey Punch’, Lupin III: The Castle of Cagliostro (ルパン三世 カリオストロの城,1979) followed the Lupin III television anime (some episodes of which were animated by Miyazaki and Isao Takahata) and was the second animated film inspired by the manga.

Arsene Lupin III is a rather mischievous character – a thief with a heart of gold – and the movie begins with Lupin and his sidekick Daisuke Jigen running off in a car full of loot. They have just robbed a casino, but discover during their getaway that the money is ‘goat bills,’ a legendary counterfeit that has been plaguing the world for centuries. This triggers a series of events that lead them to tracking down the counterfeit operation and trying to rescue Lady Clarisse, whose wicked distant cousin the Count is trying to force her into marriage with him. Throughout all this, Lupin is trying to evade the clutches of his arch nemesis, Inspector Zenigata. It’s a funny, action-packed, madcap film that mixes many genres including ninja films, private eye, slapstick, and chase films with a touch of romance to boot.

I had seen stills from the film before and because The Castle of Cagliostro belongs to the Lupin III franchise I was expecting a film with a very different look than Miyazaki’s other features. Most of the central characters are not typical of Miyazaki’s character style as they were created by the original manga artist and seem influenced by French and Belgian cartoon design. Despite the constraints of ready-made character design and locations, Miyazaki and his team’s distinctive touch reveals itself throughout the film. Clarisse’s face, for example, was a cross between Takahata’s Anne in Akage no An (1979) and Nausicaa and Clarisse’s elderly gardener looked exactly like Heidi’s grandfather. . . complete with an extra large dog (though a different breed) at his side. The romanticized Europe-inspired landscape also features in Heidi as well as later in Kiki’s Delivery Service (1989). The most distinctive Miyazaki touch was the helicopter-like flying craft used in the rescue sequence at the north tower. Miyazaki’s love of flying contraptions is a theme that runs through many of his films, most notably Laputa: Castle in the Sky (1986) and Porco Rosso (1992).

The rooftop chase scenes at the beginning of The Castle of Cagliostro are right out of Hitchcock’s To Catch a Thief (1955), in a nod to the master of suspense whose film no doubt inspired the original manga. Two other brilliant chase scenes are clearly inspired by Charlie Chaplin’s Modern Times (1936). They show Lupin maneuvering through the machinery of a water mill and later a clock tower. This visual homage reminds that the slapstick of Lupin’s elaborate escapes complete with visual gags and his sentimental soft spot for rescuing a damsel in distress like Clarisse owe much to the silent comedy greats like Chaplin, Buster Keaton and Harold Lloyd.

Female characters are few and far between in this action-packed adventure but the two main female characters have a solid presence in the film. Clarisse is no ordinary ‘damsel in distress’ and does her best to escape on her own at the beginning of the film. She also saves Lupin’s butt several times during the big rooftop escape scene. Far more impressive is the character of Fujiko, Lupin’s former lover, who seems to be a spy and thief all wrapped into one. Fujiko takes no prisoners and shows no weakness throughout the film. She is in the thick of the action holding a handheld camera to film events for live television during the interrupted marriage scene and at the end she gets away one her own with one of the counterfeit printing machines. Someone really ought to make a spin-off series with Fujiko as the main character. I think the world is ready for more female action heroes.