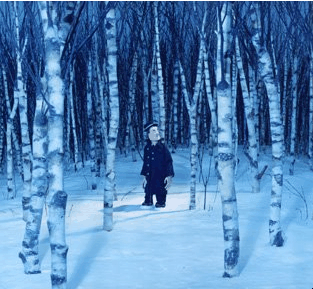 Matsuo Basho (Trans. Robert Hass)
This haiku by Basho neatly sums up the mood and themes of Tomoyasu Murata (村田朋泰)'s 2003 puppet animation White Road (白の路/Shiro no Michi). The second of five planned short films exploring the psyche of a melancholy pianist, White Road has an elegiac and nostalgic tone.
Like all of Murata’s puppet animations, White Road has no dialogue or narration. The story is told through image and sound. The melancholy mood is created through character expression, the sentimental music of composer Fumikazu Sakamaki (逆巻文和), who also did the music for Murata’s films オモヒデ and Scarlet Road), sound (wind, crunching of snow), silence, and colour. As the title suggests, the predominant colour in the film is the white blanket of snow but this colour is complemented by the use of blue light which adds to the general feeling of sadness. As ever, Murata’s attention to detail is flawless and the film is quite moving to watch.
White Road shows the nameless pianist returning to his rural childhood home in the winter. He is haunted by the memories of the young girl who had been his playmate and the puppy that they loved but died, possibly due to their unwitting neglect. The pianist’s memories are evoked through flashbacks that sometimes involve him sharing the screen with his younger self. Particularly poignant is the scene when he mourns the puppy and an adult ghost of the dog looks on as if forgiving him for his childhood mistake. We are also invited to share in the pianist’s grief for his lost childhood friend, who moved away with her family. Murata introduced his latest installment of the series Lemon Road (檸檬の路) this year and I do hope that the more cheerful colour will allow for a more uplifting side to the pianist character to be revealed.
White Road brought Murata’s work to a wider audience in Asia because it was re-edited and used as a music video for popular J-Pop band Mr. Children’s 2004 song Hero. Images from other animated films by Murata were projected onto screens during Mr. Children’s 2004 Shufuku no Oto tour.
The DVD includes a short documentary Hitori-Goto (Speaking to Oneself) which follows Murata as he heads from Prague to the 2003 Anifest animation festival in Trěboň where Scarlet Road is being screened. As with the documentary/‘making of’ extras on his other DVDs, the low quality of the footage is surprising. The handheld camerawork is sloppy, but occasionally punctuated by nicely framed scenes. Particularly surprising is the poor quality of the sound because Murata pays such particular attention to sound in his animation. He also doesn’t impart much in the way of information during the journey… though there is a teasing glimpse of him at work filming White Road at the very beginning. The documentary is worth watching however for the occasional slideshows of photography. There is also a great sequence towards the end of the film in which he records a female voice making an announcement over the public address system to the empty streets of a neighbourhood. This makes a wonderful connection between small town Czech Republic and small town Japan, where one also hears such public reminders over the P.A.
I have the limited edition DVD box set which includes postcards of pastel illustrations inspired by White Road (3) and Scarlet Road (3) and a picture book of White Road illustrated with pastel artwork based on the film. The box set is available at yesasia.com (link below) as well as Murata's webshop.

Posted by Cathy Munroe Hotes at 6:29 am