From Innocence to Impermanence 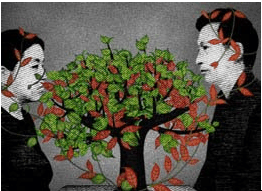 After much contemplation, the best translation I can come up with is: “From Innocence to Impermanence: Art Animation’s Turning Point.” Moku (innocence) and Mujou (uncertainty/impermanence) are both Buddhist terms with a depth of meaning that require much more contemplation than a single blog entry allows. The simplest explanation is that one of the basic teachings of Buddhism is “shogyo mujou” meaning that all things are impermanent and that world is in a constant state of flux. My interpretation of this title is that the work of these experimental artists represents a new phase in the ever-changing world of art animation in Japan.

These ten films represented Japan in the Play Forward section of the 60th Locarno Film Festival (April 2007). Play Forward, conceived by Tiziana Finzi, provides an opportunity to present a wide selection of contemporary films that indulge in audiovisual experimentation. The works presented in Play Forward are strong, radical, and sometimes extreme in either form or content.

If you can read Japanese, Takashi Sawa’s introduction to the line-up, film summaries, and stills can be found here. One point of interest Sawa raises is how the increased use of digital technologies have affected animators. My feeling, based on my viewing of other films by these artists, is that most of them try to find a happy medium between traditional animation styles and modern technology. Much of the work in the work of these filmmakers is still done by hand, but computers speed up the editing process considerably. Mika Seike is particularly interesting for her use of scanned real objects (like leaves), collage, and digital technology (the image at top is from Seike’s film).

I have not yet seen the films on this programme, but was translating the information about these new films for my own research purposes and thought I would share them with you. Some of the films have showed separately at international festivals this past year including Aurora (Norwich, UK), VIFF, and the Toronto Japanese Short Film Festival. As this is their second time screening as a set, I am hopeful that Image Forum will produce another DVD as they did with Thinking and Drawing and Tokyo Loop.

Most of these artists have worked with Image Forum in the past. Tanaami Keiichi and Nobuhiro Aihara have made many collaborative films together which they call “animation battles.” Check out anipages for more details. They also produced films independently of each other. They both, along with Mika Seike, Atushi Wada, among others, contributed films for Tokyo Loop. Seike, Suwami Nogami, Naoyuki Tsuji also had their work featured in Thinking and Drawing. Satoshi Ono, one of the younger animators in this group, is perhaps best knowm for the documentary film Homemade Sake (Danshizake, 2001). The film was the product of his studies at Image Forum and won him an award upon graduation from their filmmaking program.

In international festivals, this film has screened under the name Suzie no Name, but I think the actual Japanese title would be read Suzu no Name wa, which means “What’s the bell’s name?” In it, a man and a woman from the same country encounter each other in a noodle shop in Bali. They encounter strange characters at every turn. This is the extended version of Morofuji’s earlier film 6756 HAKATA (2003).

Issun Boushi is a renowned character from a series of children’s picture books published by Kodansha – similar to the story of Tom Thumb in English folklore. Tanaami and Aihara dig deep into their childhood memories of these book to create the images for this film. Not unlike the stories of the Brothers Grimm, Tanaami and Aihara highlight the fear and malice of the classic Issun Boushi tales, and well as their dark humour and unspoken eroticism.

From the stills I have seen of this film, it is clear that Seike continues to use her signature visual style of scanned objects from nature coloured against a background whose texture reminds me of newspaper print. The male and female characters use the same actors (or models? I think she photographs them then animates the photographed image) as in her previous film. Seike’s films have a feminist theme about the relationship between men and women. In Fishing Vine, the man was a voyeur looking at the woman first through binoculars and then trying futilely to climb up the grape vines to her. In this film, the man and woman finally have a face to face encounter. The film shows how their conversations deepen day by day.

Benjamin Ettinger saw this film at VIFF in 2005, but as they give a new date it may have been re-worked in the mean while. Ettinger calls it “a surprisingly enjoyable bit of surrealism, with salarymen patiently lined up to have their noses pinched and people lunging at goats and so on. Wada is interesting because he’s mentioned that he didn’t get into animation because he cared about animation. . . It all started with the germ of simply being curious to see how a crude sketch would look if it moved. His films have the naïve freshness and unpredictability of kids’ drawings.” For his full review, click here.

This film, like Day of Nose, uses Wada’s trademark rounded pen and ink characters to explore what it means to create and how one’s vision alters over time.

A mysterious and rather beautiful reverie in three short chapters, this film ponders the eternal question of what it means to drink coffee in the middle of the night.

This film dwells on the question of forgetfulness in our modern culture of convenience and cult of the new, and ponders the value of what is thrown away.

In this strange tale depicted in Tsuji’s regonisable charcoal drawing style, a brother and sister are nearly eaten by their father. They escape their home and run away with their father’s black car. They end up in the wilderness, where they meet a giant and a witch. The soundtrack uses the sound of a bass guitar, and the Aurora programme describes it as a cross between a manga and a fairy tale by the Brothers Grimm.

Saito takes the art of animation back to its basics by animating line drawings done on a white board. A modern take on Stuart Blackton’s pioneering chalkboard animation, Humorous Phases of Funny Faces (1906).

This film takes on the weighty themes of human consciousness and double suicide.

Posted by Cathy Munroe Hotes at 7:01 am