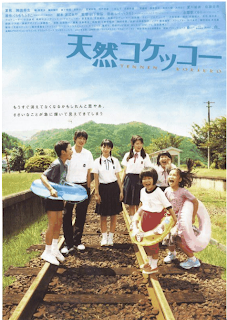 A noticeable trend at Nippon Connection this year was films that favoured atmosphere and character development over plot. Like Naomi Kawase’s The Mourning Forest and Yosuke Fujita’s Fine, Totally Fine, Nobuhiro Yamashita’s A Gentle Breeze in the Village (天然コケッコ/Tennen Kokekko) devotes a lot of attention to setting just the right tone through his careful attention to setting and community. This results in a heartfelt picture of the life of a young woman growing up in rural southern Japan.

Yamashita is skilled at creating realistic portraits of the lives of teenagers, as he demonstrated in his hit film Linda Linda Linda (2005) which told the story of a group of girls preparing a punk-rock number for a high school talent show. Gentle Breeze moves from the more urban high school setting of Linda Linda Linda to a rural school in the mountainous prefecture of Shimane. Screenwriter Aya Watanabe adapted the award winning 1996 manga Tennen Kokekko by Fusako Kuramochi.

The central character is Soyo Migita, played charmingly by the model turned actress Kaho. Soyo is the eldest student of only six children in a combined primary and junior high school. The children have all grown up together and function like an extended family. It may seem unrealistic for a school to exist with so few students, but it is not uncommon in rural Japan. I have visited such a school at the opposite end of Japan – the town of Toyotomi in northernmost Hokkaido – which had 40 students and even had an American on staff teaching English. Like Soyo, who will have to travel by train to high school the following year, the students in Toyotomi have to become boarders in Sapporo, five hours drive away from home, in order to complete their high school education.

Yamashita introduces us to the rural school, with its roosters in the playground (the kokekko of the Japanese title is an onomatopoeia for sound of a rooster crowing), through the eyes of Soyo. Thus we see her motherly care of young Sa-chan, who is prone to not making it to the toilet in time, and her sisterly relationship with the girls closer to her age. The only boy in the school is Soyo’s brother Kotaro.

The harmony of the group of children is disrupted by the arrival of Hiromi Osawa (Masaki Okada), an attractive boy Soyo’s age who has transferred from his school in Tokyo. Hiromi has moved in with his grandfather because his parents are in the middle of a messy divorce. Thus begins the slow, awkward, but completely realistic, first romantic experience for Soyo.

Hiromi’s arrival also instigates the development of several different storylines and themes. The film ponders the contrast between urban and rural life in Japan and the difficulties for children in rural communities to have a romance without the whole town knowing about it. Soyo must learn to deal with the jealousy of her girlfriends at her budding romance with Hiromi.

I don’t want to give the impression that the film overly romanticizes country life. There are many suggestions of darker things going on behind the scenes. Soyo becomes aware of the fact that Hiromi’s mother may have been sweethearts with her father when they were younger, and she speculates that they may still have feelings for each other. Yamashita handles these subplots deftly. As we only see the world through Soyo’s perspective, these background stories are suggested but Yamashita leaves it up to the audience to fill in the details, much in the same way one would in real life. The chatty postman, who embarrasses everyone with his gossip and speculation, adds a dash of humour to the proceedings.

Films about young love often come off too stagy because the actors lack the maturity to pull off romantic scenes convincingly. At other times, comedy is used to distract from the awkwardness of young love. In A Gentle Breeze in the Village, Yamashita leaves the awkwardness in and allows the two young actors to fumble their way through the early stages of teen romance with charm, tenderness, and the real discomfiture that attends such moments. The resulting film is a real pleasure to watch. Here the trailer to give you a hint of why you should watch this film: