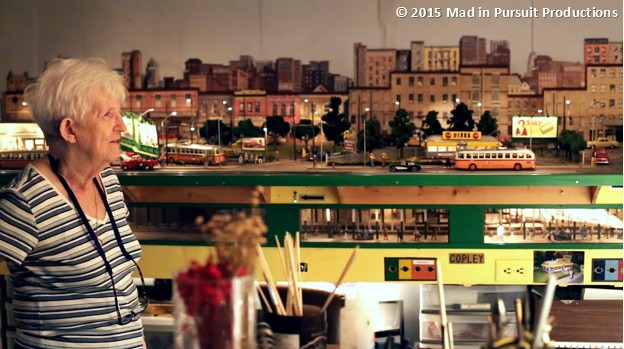 When contemplating his collection of books, the philosopher Walter Benjamin wrote “Every passion borders on the chaotic, but the collector’s passion borders on the chaos of memories.” (Illuminations, p. 60).  When a collector passes away, this “chaos of memories” is passed on to loved ones who often struggle with whether to keep or discard items that represent a lifelong passion.

In the case of Hilda Walsh, her husband Ivor Walsh (1923-2002) was a streetcar enthusiast.  His favourite streetcar system was the one in Boston, Massachusetts.  Beginning in 1979 or 1980, Ivor began transformed the Walsh’s basement in Toronto into a miniature replica of Boston’s Green Line as it would have looked in the 1950s.  In addition to the meticulously modeled streetcars and tracks, the miniature streetcar scene features highly detailed neighbourhood buildings with interior and exterior lights including an authentic 1950s diner complete with customers eating their meals.  The roof of one of the stations has 350 miniature light bulbs in its ceiling.  When he was alive, Ivor would have the streetcar running all day while listening to cassettes of Frank Sinatra.

This slice of life short documentary by Naomi Hocura is a loving tribute to the life and passion of Ivor Walsh, told in the first person by his widow Hilda and his friends and fellow enthusiasts Dave Haire and Phil Spencer.  It also tells us a great deal about Hilda herself, her warmth, her love for her late husband, and her own passion for making stained glass.  I particularly love the cinematography of the film, such as the cutaways of close up details of the tracks and the miniature scenes.

Tiny Tracks had its world premiere at the Hot Docs festival in Toronto.  Carol Off interviewed Naomi Hocura and Hilda Walsh about the film for As It Happens.  The Toronto Star also wrote about the film.

Naomi Hocura is a Canadian musician / artist / filmmaker / curator based in Erin, Ontario.  In 2009, she curated the animated short programme Seconds Under the Sun (Toronto/Winnipeg) featuring works by animators from puppet master Kihachiro Kawamoto to cutting edge avant-garde artists like Akino Kondoh and Atsushi Wada.  I once saw her perform a psychedelic soundtrack to Kenji Mizoguchi’s The Water Magician (1933) with her band the Vowls (Shinsedai 2010).