Children Who Chase Lost Voices from Deep Below (星を追う子ども, 2011) 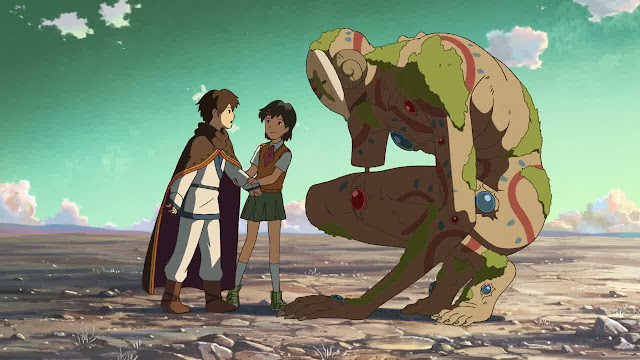 “.  .  .  it came in a language
Untouched by pity, in lines, lavish and dark,
Where death is reborn and sent into the world as a gift,
So the future, with no voice of its own, nor hope
Of ever becoming more than it will be, might mourn.”

For his latest anime, Children Who Chase Lost Voices from Deep Below (Hoshi wo Ou Kodomo, 2011), animator Makoto Shinkai delves into legends about the underworld.  In Japanese creation mythology, it is said that the female deity Izanami dies and goes to Yomi – the “shadowy land of the dead.”  The male deity Izanagi goes after her and tries to bring her back to the land of the living.  The tale has many similarities to the ancient Greek tale of Orpheus and his wife Eurydice, and Shinkai draws on the symbolism of both of these tales in this, his most complex animated film to date.

The central character is a lonely preteen girl called Asuna Watase.  Her father died when she was very young and her mother often works night shifts at the hospital which means that Asuna is frequently left to fend for herself.  In addition to her schoolwork she cleans her own clothes, makes her own meals, and does other chores around the house to help out as much as she can.  Although she is doing well in school and seems to get along well with her classmates, Asuna spends a lot of time on her own.  She often sits on the hillside listening to strange music that she can pick up on the crystal radio left to her by her father.

One day while crossing the rail bridge, she is attacked by a giant, bear-like creature.  A mysterious boy named Shun rescues her and the next day they bond with each other listening to the crystal radio.  Shun tells her that he comes from another land called Agartha and there appears to be a connection between his native land and the music Asuna listens to on her radio.  They promise to meet up again the next day, but Shun has disappeared and is rumoured to have fallen to his death into the river.

Meanwhile, Asuna’s teacher goes on pregnancy leave and is replaced by a charismatic male teacher called Morisaki.  Asuna is fascinated by Mr. Morisaki’s tales of the underworld and visits him at his house to learn more.  It turns out that both Asuna and Morisaki are destined to journey into the underworld (Agartha) together – Asuna is drawn there by her natural curiosity and her desire to be loved, whereas Morisaki has been driven mad by his grief for his late wife and he uses violence to go on his Orphean quest to resurrect his wife. 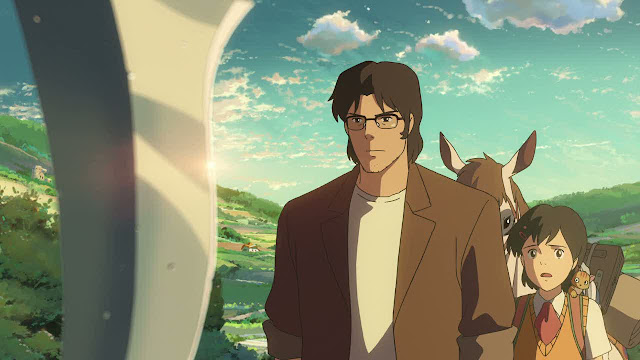 Makoto Shinkai has admitted in interviews that he has been deeply influenced by the films of Hayao Miyazaki and the influence is very strong in Children Who Chase Lost Voices from Deep Below.  Asuna has a little cat-like creature – which the medicine man in the underworld calls a yadoriko – which is very similar to the fox-like creature Teto in Nausicaä of the Valley of the Wind (1984).  The Quetzalcoatls resemble some of the kami from Princess Mononoke (1997) as well as the stone robots of Laputa: Castle in the Sky (1987). The use of a flying ship – the Shakuna Vimana ark – is also very Miyazaki.

While the Miyazaki influence is undeniable, I am not one of those critics declaring Shinkai as the next Miyazaki.  First of all, I think that’s putting way too much pressure too soon on a director who has not yet fully matured as an artist.  Second of all, Shinkai’s films have a very different feeling to me than Studio Ghibli films.  Shinkai’s work takes itself much more seriously than a Studio Ghibli film.  A typical Ghibli film is full of visual gags and self referential humour, whereas there are few laughs in Shinkai.  What sets Shinkai apart from his peers is that he is the master of dreamy landscapes.  He uses such a colourful palette – and not just for landscapes.  Some of the interior sequences of the medicine man's home looked as colourful and intricate as a patchwork quilt.  One of the more interesting sequences was the flashback to all the famous world leaders from Caesar to Napolean, from Hitler to Stalin who, according to the legends of the bottom-dwellers – tried to plunder the riches of the underworld.  The sequence was painted like an elaborate wall mural.

Children Who Chase Lost Voices from Deep Below is on the one hand the moving story of a lonely girl’s quest to make sense of the world she is living in.  On the other hand, for the viewer it is a philosophical journey into the realms of the possible.  Although there is some influence of the Orpheus myth, the ideas in this film largely come from Shintō, Buddhist, and even some Sanskrit thought, with the medicine man reminding us that while it is normal to grieve the dead, we should not pity them for the cycle of life and death is a natural one.  Death is not to be feared but accepted.  We need to count our blessings and learn to let go of the past in order to continue on our journey into the future.

Posted by Cathy Munroe Hotes at 7:55 am