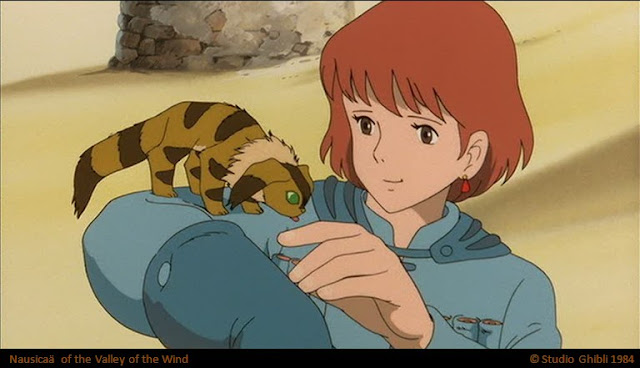 An interview with Anna
Age: almost 7
Film: Nausicaä of the Valley of the Wind (風の谷のナウシカ, Hayao Miyazaki,  1984)

Tell me about Nausicaä.
Nausicaä is brave.  She wants to save the world.

What does she need to save the world from?
The bad fungus.
What is your favourite part of the anime?
I like Nausicaä’s fox squirrel Teto.  Actually, I like all the animals because they are interesting.

There is a lot of fighting in the movie.  How did you feel about that?
Bad.  They should be normal and nice to each other.

What were the most exciting parts?
For me it was exciting when the Ohmu came up from the water.

The movie isn’t just serious.  I noticed that you were laughing sometimes.
What did you find funny?
When the man said “She’s still alive. . . that was a short-lived dream”
[This is the moment when Kushana returns and takes control back from Kurotowa.  Anna thought he was hysterical.  We were watching the German dub, so my quote might not match the English dub/subs.]

What did you think about Kushana, the Princess of Tolmekia?
She was dumb. 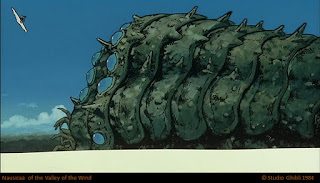 If you could be any character in the film, which one would you be?
I would be all the insects and ummmmm. . .  the fox squirrel.
Let’s play Mama Ohmu, Baby Ohmu. 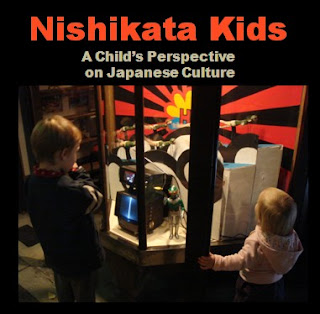 Posted by Cathy Munroe Hotes at 5:37 am