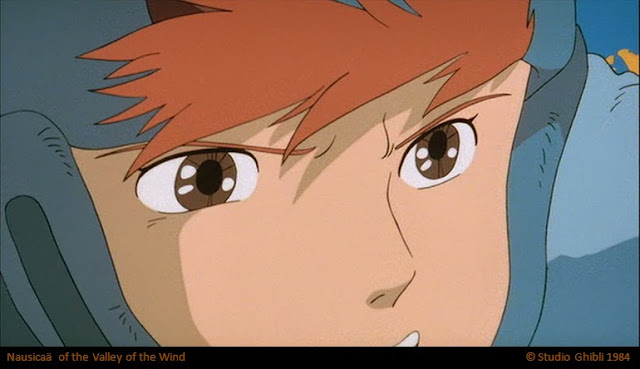 When I was a girl there were few heroines in animation with whom I could identify.  Snow White and Cinderella were too good and unattainably beautiful.  I was a bit of a tomboy, so I recall doing some Wonder Woman and She-Ra: Princess of Power role playing, but I found their sexy costumes a bit off putting.  It is such a shame that Hayao Miyazaki’s Nausicaä of the Valley of the Wind (風の谷のナウシカ, 1984) was not dubbed and released in North America in its original version, for I suspect my then ten-year-old self would have fallen in love with the gutsy young heroine Nausicaä.

My suspicions were confirmed when I watched the film on DVD with my two children.  Both Lukas and Anna loved the film, but my young daughter really warmed to Nausicaä.  Her heart melted in the scene where Nausicaä adopts her furry fox-squirrel companion Teto.  She cheered during the fight scenes and both children were excited by the dynamic animation of the scenes in which Nausicaä is flying her Mehve jet glider.  They had no great love for Kushana, the Princess of Tolmekia but warmed to the buffoonery of her aide-de-camp Kurotowa .

My children are also both nature-lovers and Nausicaä appealed to their interest in the environment.  The environmentalist message of Nausicaä is even more important today than it was in the 1980s, and is so well executed that it won the film the seal of approval of the World Wildlife Fund (WWF).  Nausicaä is set in a future world in which is facing an environmental apocalypse.  Humanity clings to survival on a planet that is being taken over by the polluted “Sea of Corruption.”  The few communities (the Valley of the Wind, the Pejite, the Tolmekia, and the Dorok) that are left have begun to fight each other for the dwindling resources.  Nausicaä is one of the few who recognizes that in order for people to survive, they need to find a way to live in harmony with the other creatures of the world such as the Ohmu – giant crustaceans that resemble pillbugs – whereas others see violence and warfare as their only means of survival.

This is not a film that one can just pop into a DVD player and leave kids to consume alone.  There is a lot of violence, including the murder of innocents / the defenceless both human and non-human, and challenging themes (senseless destruction of the environment, warfare, and so on).  I think the part that upset my children the most was the cruel torture of the Ohmu by the Pejites.  Although these are difficult topics, I found the film really invigorated my kids to talk about how the lessons of the film can be applied to their own everyday lives.  From discouraging their friends from harming insects and other small creatures to the day-to-day things we can do to better the natural world around us, Nausicaä inspired my children to stand up for what they believe in.

In addition to being a terrific story, Nausicaä is also a fine example of animation.  It won Miyazaki his second Noburo Ofuji Award for innovation at the Mainichi Film Concours.  Particularly notable are the exhilarating flying sequences with Nausicaä on the Mehve and the God Warrior sequence animated by Hideaki Anno (of Neon Genesis Evangelion fame).  My favourite sequence was the flashback / dream sequence of Nausicaä's youth (image above), which was animated in a completely different style than the rest of the film.

This review is part of Nishikata Film's series on the Noburo Ofuji Award.

Posted by Cathy Munroe Hotes at 1:27 am