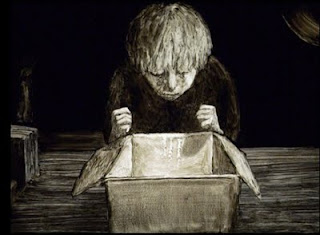 A house stands against a pitch black sky surrounded at the end of a field of tall grass.  The house is surrounded by a tall, imposing wall. Suddenly, there is a movement in an upper storey window and a young boy escapes the house down a rope. As he exits the gate, he crouches down and begins to hop like a bunny rabbit down the path. He pauses for a moment, kneeling in order to pick up something small and put it in a jar, and then he continues to hop down the path.
In the next moment, we see that he is chasing little maggots as they crawl about under the light of a street lamp. He follows the little white worms to the base of the streetlamp and they lead him to a cardboard box. Opening the box, he discovers the carcass of a rabbit, its stomach wide open as if it has been disembowelled in a lab experiment.
In the reverse shot of the boy’s reaction to his discovery, we suddenly find ourselves back in his room. He delightedly pulls out the rabbit, holding it up in his arms as if he were a child discovering The Velveteen Rabbit

at Christmas. He lays the rabbit on a table and gets out his jar of maggots and pours them into his gaping belly then sews up the rabbit. The maggots begin to devour the flesh of the rabbit, causing its surface to writhe. The boy widens his eyes in wonder and delight.  He embraces the rabbit, as if in a scene out of a storybook and a tear falls from his eye. In the final shot of the film before the credits, a maggot falls, replicating the moment of the tear, against a black background and crawls off screen.
I first saw MAGGOT as part of the CALF Animation Special at Nippon Connection 2011. It was the only film on the programme that was completely silent. There was some unease in the audience because we thought there was a technical problem, but the lack of a soundtrack was an intentional decision on the part of the animator Saori Shiroki. I contacted her to find out why she decided to leave the film silent.
The first reason is that she was concerned that the music would distract or mislead the audience in their interpretation of the film. Shiroki experimented with several different options for the sound design of the film, but none was satisfactory. Using realistic sounds of the maggots would distract from mood of the piece as the boy himself is the emotional centre of the film. Shiroki explained to me that she felt there would be no music in the boy’s head because he is so intently concentrating. She wanted to create the impression of the child as an innocent and adding music may have taken away from the impression she wished to create.
The second reason relates to Shiroki’s love of silent movies. Of course, silent movies were never really completely silent as they had musical or benshi accompaniment, but silent movies do draw our attention to the importance of sound in a film. Particularly, how the accompaniment can alter our interpretation of the film. Shiroki’s passion for silent movies also explains the colourless nature of her films. Instead, she  is drawn to the stark contrasts of black and white composition. The absence of colour means that the textures of the brush strokes are central to creating mood.
For me, MAGGOT gives the impression of a lonely child. In order to interact with the world, he must escape from the confines of his room. There is something so tragic about the innocent delight he takes in collecting the maggots and holding the rabbit corpse in his arms. It makes such a contrast with the classic children’s story, The Velveteen Rabbit

in which the velveteen rabbit first competes with other toys for his boy’s affection and then seeks to become real through love. MAGGOT is this story in reverse: the boy appears to have no toys and seeks to bring to life a real rabbit that has been killed. It’s a heartbreaking series of images and not for the faint of heart. . . nor the weak stomached.
This is part three in a four part series examining the work of Saori Shiroki (銀木沙織, b. 1984). Click on titles in the filmography to read more.
Catherine Munroe Hotes 2011
Filmography

Posted by Cathy Munroe Hotes at 5:28 am