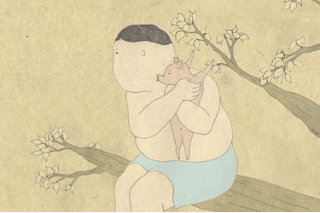 As I mentioned in my earlier post, there will be a lot of exciting, innovative animation at Nippon Connection 2011. On Friday, 29th April at 18:00 in the Festivalzentrum there will be a presentation of works by CALF animators with the film critic Nobuaki Doi, the animation team Tochka, and independent animator Mirai Mizue in attendance. The programme includes works by these artists and Atsushi Wada, Kei Oyama, Shin Hashimoto, Aico Kitamura, Saori Shiroki, Masaki Okuda, Naoyuki Tsuji, Wataru Uekusa and Dong-Hun Kim.

This event will be followed by a discussion with Nobuaki Doi, Mirai Mizue and Tochka at 20:30 that I will be moderating.  Hope to see you there!
Click on the links to read reviews of the films/more about these artists on this site.

The Mechanism of Spring (Atsushi Wada, 2010) 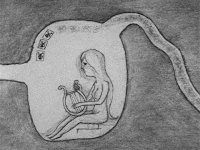 Thinking and Drawing
Posted by Cathy Munroe Hotes at 12:08 am