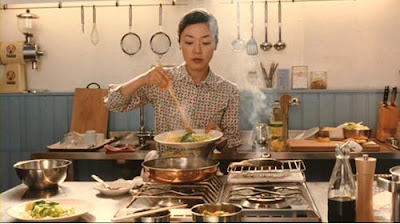 (Lasse Hallström , 2000) were arguably responsible for elevating the international reputations of their directors. The unsung heroes behind the success of these films are their food stylists.
In the past decade, food stylist Nami Iijima (飯島奈美, b. 1969) has made a name for herself in Japan not only for the simple elegance of her work in the movies but  also as a cookbook author. Iijima’s love of cooking began when she was very young and led to her studying nutrition in college. While she dreamt of becoming a professional chef, she was inspired by a photograph in a magazine to go into food styling.
Some of Iijima’s early work as a stylist was for commercials. Some of her clients included Pasco’s sliced white bread, Ajinomoto’s dashi (basic soup stock), Kewpie’s Aohata 55 Jam, and Nissin Foods’s chicken ramen.
Iijima’s big break came in 2006 when director Naoko Ogigami was looking for someone to style the food for her independent feature film Seagull Diner. One of her producers had also worked on TV commercials with Iijima and recommended her to Ogigami. Seagull Diner became a word of mouth hit when it was released and the two women have continued to collaborate on films together ever since.
In a recent interview for her film Toilet, Ogigami explained what drew her to Iijima:
When I saw her hands, I thought they were very special. I mean, she is… a bit chubby. And her hands look so gorgeous. I understood why she could make such good food. She also has a very warm personality.  (source: Film International)

Since the success of Seagull Diner, Iijima has styled the food for many other popular films including Tokyo Tower (2007), Chef of the South Pole (2008), and Villon’s Wife (2009). In addition to collaborating with Ogigami, she has also followed Ogigami’s favourite actresses Satomi Kobayashi and Mikako Ichikawa to other off-beat independent film projects like Mika Ōmori’s Pool (2009) and Kana Matsumoto’s recent release Mother Water (2010). Iijima has also worked on the television dramas Shinya Shokudō (TBS, 2009) and Tenshi no Wakemae (NHK, 2010). 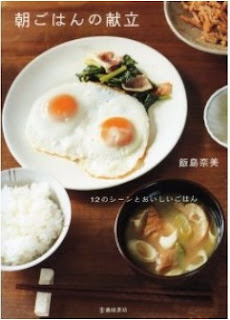 In the past few years, Iijima has released a number of popular cookbooks including LIFE: Iijima Nami’s homemade taste (2009), LIFE2 (2009), and a sweet little book about breakfasts (pictured above). Needless to say, they are all beautifully photographed. Although her specialty is traditional Japanese home cooked meals, Iijima is also influenced by cooking styles from other countries. Check out Nami Iijiima’s official website here.  Read a recent interview with her here.

Filmography (links lead to reviews on this blog)