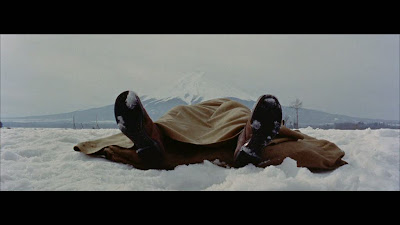 Samuel Fuller’s House of Bamboo (東京暗黒街・竹の家, 1955) was the first Hollywood feature film to be shot on location in Japan. One earlier film, Tokyo Joe (Stuart Heisler, 1948), did shoot footage in Japan, but principle filming with the cast was done on a back lot in Hollywood. It also seems likely that House of Bamboo was the first film shot in Japan using CinemaScope – the high price and relative rarity of film stock in post war Japan meant that most domestic films were still being shot in black and white.

Robert Stack plays Eddie Spanier, an undercover agent brought in to investigate the murder of an American sergeant during the heist of a military train carrying guns and ammunition. He uncovers a mob of American gangsters led by Sandy Dawson (Robert Ryan). He infiltrates their ranks in order to try to bring them down in a plot that is loosely based on The Street with No Name

(William Keighley, 1948) – an earlier film written by the same screenwriter Harry Kleiner. Some romance is thrown into the story in the form of Mariko, played by Shirley Yamaguchi (the Hollywood star) aka Li Xianglan (the hugely popular 1940s Chinese singer-actress) aka Yoshiko Ōtaka (the Japanese politician). The film also stars Sessue Hayakawa – the biggest Japanese Hollywood star of all time – as Inspector Kito. Fans of Star Trek should keep their eyes peeled for DeForest Kelley in the role of Charlie.
A narrator announces during the opening sequence that the film was photographed in Tokyo, Yokohama, and the Japanese countryside in 1954, but anyone who has spent any time in Japan will immediately pick up on the fact that many of the interiors are not Japanese. The interior scenes shot with Robert Stack and Shirley Yamaguchi, for example, clearly have straw mats rolled out on concrete floors in order to resemble tatami floors, but the set design is very inauthentic.  The most glaring error is that many of the houses lack a genkan – a traditional entryway into a building where one can remove one’s shoes. . . but as none of the Americans remove their shoes before entering the houses I guess they didn’t feel the need. And don’t even get me started on the "Japanese" bathtubs which can be viewed from the front door.   There is a scene featuring an authentic sento – which Robert Stack rudely busts into looking for Yamaguchi (hence the image of her in a towel for the movie posters).  Amusingly, Robert Ryan's house is a high-ceilinged affair, seemingly designed to fit his tall frame and featuring unlikely views of Mt. Fuji from his garden (especially when compared with the realistically smoggy Asakusa roof top scenes).
The best scenes in House of Bamboo are by far the ones shot on location. Thanks to the CinemaScope lenses from Bausch and Lomb and the vibrant DeLuxe colour, Samuel Fuller and his cinematographer Joseph MacDonald managed to capture some stunning winter scenes of Mount Fuji shot from the train line between Fujiyoshida and Kawaguchiko. From an historical perspective, the shots of the port at Yokohama when Robert Stack arrives and the shots of the Sumida River are fascinating. In the mid-1950s most visitors to Japan still arrived via ships to Yokohama, and the Sumida River was still cluttered with fishing boats and wooden houses.
Asakusa is heavily featured in the film - though many of the city streets and buildings have been so altered in the intervening decades as to make it barely recognizable. The Kokusai Theatre has long since been torn down and replaced by the Asakusa View Hotel and the Matsuya Department Store rooftop no longer boasts the unusual globe-shaped amusement ride on its roof (see what it looked like at the Showa Navi). It provides a spectacular location for the climatic final shoot-out with glorious views of the Sumida River and the popular temple Sensō-ji.
As far as Hollywood detective films go, the film satisfies on the whole. There is a fascinating sexual tension between the male leads, Robert Ryan and Robert Stack, which an interview with Samuel Fuller by Robert Porifrio and James Ursini reveals was intentional. The plot takes surprising twists and turns – all part of the charm of watching a Fuller film. 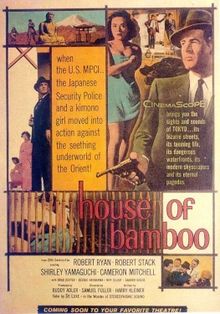 I had the impression that Twentieth Century Fox was doing its best to give a positive impression of Japan in return for the goodwill of the Japanese government and police during the shooting of the film. In spite of these efforts, the film was not particularly successful in Japan – largely because the country is only a backdrop to the film – the story really could have taken place anywhere.
The lack of depth in terms of integrating the story into its exotic location leads to a lot of jarring things that just make no sense at all. The most obvious of these is the fact that the American gangsters in their fedoras stand out like sore thumbs everywhere they go. It is laughable to suggest that they could pull off these heists without any of the locals noticing and informing the police. The fact that they raise funds by blackmailing pachinko parlours also draws attention to the glaring absence of yakuza in the film. . . not to mention how unlikely it would be for Sandy to run such an elaborate scheme without speaking a word of Japanese apart from “ichiban” and “kimono girl.” 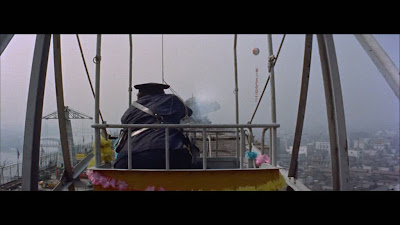 The term “kimono girl” was new to me – I’m not familiar with the lingo of Americans stationed in Japan after the Occupation so I don't know if it is authentic to the times or not. In the context of House of Bamboo, it's definition seemed to lie partway between a Western stereotype of a "geisha girl" and a gangster’s moll. The film does fall victim to stereotypes when it comes to the portrayal of women .  There are also an unusual amount of women wearing kimono in this film. On one hand, this did add some welcome colour to an otherwise bleak winter landscape. On the other hand, it did not seem particularly realistic. In central Tokyo, I would have expected to see more women in modern dress – especially when compared to Japanese films of the 1950s like Yasujiro Ozu’s Tokyo Story

(1955).
Another odd thing about the film was that the sound seemed poorly mixed in some scenes so that the sound of the room didn't always match the space we were being shown onscreen.  The  scenes with Sessue Hayakawa were particularly bad.  He had oddly been dubbed over by a voice-actor. Hayakawa became a big star during the silent period and got less work in Hollywood after the advent of sound due to his heavy accent, but he did fine in Tokyo Joe (1949) and Three Came Home (1950). . . and he would of course earn an Oscar nomination in 1958 for his English-speaking role in The Bridge on the River Kwai (1957).  The lack of match between dialogue and lips in some scenes reminded me of spaghetti westerns.
It’s not one of Samuel Fuller best films, but it is endlessly fascinating to watch.  In the U.S. it is available as part of the Fox Film Noir series:

It is also on DVD in Japan: