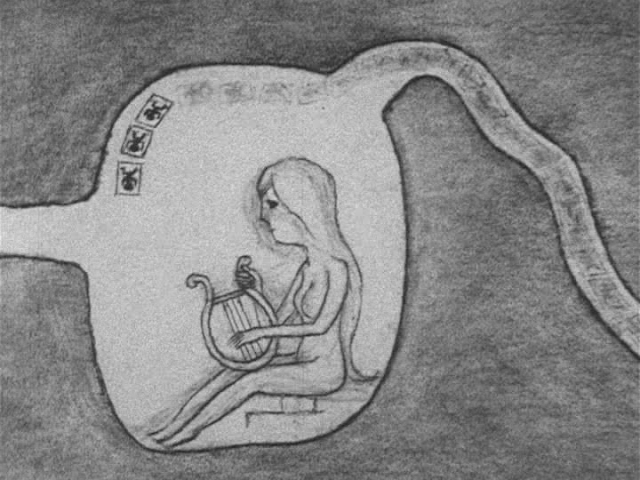 Naoyuki Tsuji’s beautiful, charcoal animations feel like an invitation into the poetic mind of the artist himself. This is due in a large part to their intuitive nature. Tsuji (辻直之, b. 1972) employs an animation method similar to that of the South African artist William Kentridge: drawing with charcoal, making erasures and changes to the image with traces of the earlier charcoal markings visible over multiple frames. The main differences between Tsuji and Kentridge are that Tsuji's work is less political, takes a stream of consciousness approach, and his drawings are more minimalistic. Tsuji’s minimalistic sketching always reminds me of the drawings of Jean Cocteau – an artist and filmmaker who shared Tsuji’s interest in dreams and the unconscious mind.
Angel: The Place Where We Were (エンゼル, 2008) begins by showing us the artist’s pixillated hand as he sketches the title of the film. Hands are an important motif in the film as the first image is that of hands coming together and clasping the centre of the frame – with the haunting traces of the rubbed out lines of previous frames still present. As in his previous films, the soundtrack is beautifully scored by Makiko Takahashi. The lilting music lulls viewers into the dream-world of Tsuji the animator-poet.
The camera pulls back to reveal a round-faced young woman with bobbed hair, her hands clasped in prayer as she raises her black eyes to look up to the heavens. Tsuji then cuts to a  young male figure, also with blacked in eyes (reminiscent of the eyes in pre-war animation) at a table with a coffee, flipping through the pages of a book. A new angle reveals that the female figure is standing to his left.
The next shot is of the young couple standing in the window of a small house. As the camera pulls back, the house gets smaller and smaller, and again the traces of how big the house was at the beginning of this sequence remain in the frame. This process of pulling back, smudging out, and re-drawing creates an eerie feeling and it makes the clouds look as though they are smoking. Eventually, the camera begins to move upwards into the sky and we see a male angel with outstretched wings and ridges on his back flying through the air.
The camera moves in to a close up on the ridges on the back and reveals three square figures with eyes sitting around a table playing cards. The winning three matching cards have humanoid figures on them and the cards fall into a hole in the table and are carried away through a tube or tunnel into a womb or small cave where a young woman plays the harp. There the cards transform into round creatures with eyes and continue down the next tunnel. They then exit out what at first appears to be a window, but them transforms into one of the eyes of the angel.
One of the three creatures descends to the window of the house and enters the room of the couple as they lie naked on the bed and it then enters into the womb of the woman. In the next scene, the woman pats her now pregnant belly contentedly with a cat curled up on the floor next to her. The scene then cuts to the male figure running to a tree. When he nears the tree, the woman steps out naked rom behind it, smiling, and with a baby in her arms. The film ends with the baby turning its head, also smiling, to look into the eyes of its father.
This is perhaps the most accessible of Tsuji’s films so far. It is just as surreal as his previous films, but has a more discernable storyline. Sexuality has long been an underlying theme in Tsuji’s films, and it was interesting to see him take on the theme of fertility and prayer in this film. The medium of charcoal usually lends itself to dark themes, so it was a pleasant surprise to see Tsuji use his signature style to render an uplifting story.


You can support this artist by buying his reasonably priced DVD Trilogy about Clouds from Japan. Although there is no English in the packaging, one does not need to understand Japanese in order to enjoy the films. I would advise against buying the Facets DVD of Tsuji’s films because the company has violated the artist’s wishes by altering the films. Read more about it here.  His film A Feather Stare at the Dark appears on Thinking and Drawing.
Related Posts:
Thinking and Drawing
15 Must See Art Animation Shorts

Posted by Cathy Munroe Hotes at 4:22 am