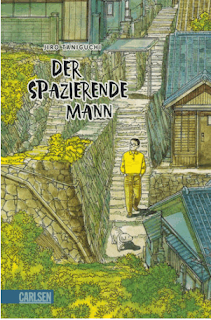 In this age of portable devices for listening to music and communicating with friends, many people seem to live their lives in a bubble, oblivious to their surroundings, as they hustle to and fro in our modern metropolises. With the growing threat of environmental crisis around the world, it is more important than ever for us to take the earphones out of our ears and look around us at the world we are living in and how we can interact with it in positive ways.
Jiro Taniguchi’s 1992 graphic novel The Walking Man (Aruku Hito /歩くひと, 1992) takes readers on a journey with the central character, a married man who seems to be in his late thirties or early forties, as he discovers the wonders to be found in his very own neighbourhood. In the first chapter, he encounters a birdwatcher and realizes for the first time that his neighbourhood is also home to a variety of common birds like great tits (shijūkara), grey starlings (mukudori), and thrushes (tsugumika).
The man and his wife adopt a stray dog, whom they name Snowflake, and the dog’s presence naturally leads to even more walks around the neighbourhood. His walks allow him to indulge in a childlike delight in the more simple pleasures of life. Some of the most indulgent moments include when he hops a fence to enjoy a midnight swim in the buff in a local swimming pool, and when lies back and floats alone in a sentō (public bath) after getting soaked in a rainstorm without an umbrella.

Many of his escapades lead to wonderful moments of intimacy between the man and his wife, as he often brings home stories and found things to share with her. For example, he purchases a kamifūsen (paper inflatable balloon) and plays with it as he walks. After a bit of a detour, he returns home and shares it with his wife. On another day, he takes off his shoes to climb a tree in order to rescue a toy airplane, then stays up in the tree to enjoy the view. When he comes down, he finds a damaged toy plane and takes it home (still barefoot!) to repair it and then enjoys playing with it with his wife. He even suffers in the hot summer sun in order to carry home a roll of bamboo to act as a sunshade for his him and his wife.
The illustrations in The Walking Man are simply beautiful and it has quickly become one of my favourite graphic novels. Although I read the German edition (Der Spazierende Mann, published in 2009 by Carlsen), I would imagine that the Japanese edition of this story would be ideal for beginners in reading Japanese because the dialogue is minimal – and there are a lot of sound words to indicate the sounds the man is noticing as he walks along. Onomatopoeia are one of my favourite things about the Japanese language.  This graphic novel is just crying out for a skilled animator to adapt it into a film.
© Catherine Munroe Hotes 2010
Posted by Cathy Munroe Hotes at 4:48 am