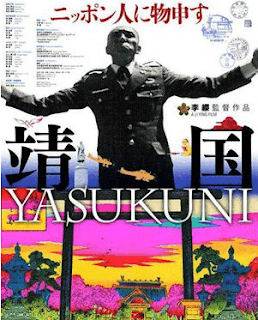 I was glad to hear that the first public screenings in Tokyo of Ying Li’s controversial new documentary Yasukuni went off without a hitch. In fact, according to The Japan Times, the general response from spectators was positive.
The controversy that has raged in the Japanese media over Yasukuni this past month seems highly ironic in light of the fact most of those weighing in on the debate had not yet seen the film. If they had, they would have found that the film does not make a highly polemic argument, rather Li Ying’s film offers up a range of perspectives on Yasukuni shrine without a voice-over narration.
The lack of voice-over narration has led to some interesting responses from Japanese spectators of the film. In his article “Confusion reigns after Yasukuni doesn’t tell us how to feel,” Philip Brasor quotes a Japanese friend who says that the “trouble many Japanese will have with Yasukuni is not that it brings up difficult issues, but that it doesn’t tell them how they’re supposed to feel about them.” This stands in stark contrast to most NHK documentaries which employ heavy use of voice-over narration. I think she has a good point. I have always found NHK documentaries difficult to watch, having long been weaned off the good old Lorne Greene Voice-of-God narration, as we called it when I studied film in Canada. I can imagine that to audiences used to this style, the lack of narration could be disconcerting.
On the other hand, I suspect that Japanese audiences may be more sophisticated than NHK programming may suggest, as the wide range of response to the Yasukuni documentary attests. The film may have no voice-over, but it does employ other methods to narrate its story. For one, Li uses title-cards (à la silent films) to fill in historical information. He also uses the device of a framing narrative to bring the story together. As much of his documentary material is made up of a string of filmed events at Yasukuni (veterans paying their respects, protests, nationalist demonstrations, a visit from Koizumi) and archival footage, this framing narrative of Kariya Naoji, Japan’s most senior swordsmith, serves an important function both stylistically and thematically.
In many ways Naoji’s reaction to the documentary camera says a lot about the average Japanese person’s dilemma with Yasukuni shrine. He is patriotic, but doesn’t want to give offence to others. Naoji seems uncomfortable with the camera’s presence at first, but after a while seems to get used to the filmmakers following him around. By the end of the film, he begins to reveal some of his own opinions about the political status of Yasukuni shrine.
Another important factor about these framing sequences is that it gives us a sense of the filmmaker’s presence. In these scenes and Li’s visit to the home of a man whose father was a conscripted pacifist Buddhist priest who was conscripted (he wants his father 's ashes removed from Yasukuni) - we hear the filmmaker asking questions and giving suggestions from off-camera.
One also gets a sense of the filmmaker’s point of view from the scenes shot at the shrine. I had the impression (confirmed by John Junkerman’s interview with Li) that Li is the one holding the hand-held camera following the action of events taking place at the shrine, so you do get the impression of seeing things from his POV quite a bit. Although it is not hammered home by narration (à la Michael Moore), it reminded me of Kon Ishikawa's Tokyo Olympiad in which at first glance it seems like an objective recording of an event, but then the framing, especially in the non-spontaneous scenes, is so deliberate that one becomes aware of Li trying to show us certain relationships between people and space (ie the space of the Shrine as place of worship, place of tourism, and place of protest).
I particularly enjoyed how Li chose to highlight the use of cameras in the film. The use of a handheld camera always draws attention to the recording device, but Li’s camera has to jostle with countless other cameras to get the images at Yasukuni shrine. Not only are there media from all over the world jostling to capture images of the protestors or of Koizumi’s visit, but the tourists and hobbyists are also out in force. The most amusing scene occurs when a small group of elderly war veterans have come to pay their respects at the shrine. The camera moves backwards in front of them as they approach the shrine, then does a reveal of the dozens of photographers wielding large cameras blocking the steps leading up into the shrine. The photographers easily outnumbered the elderly veterans.

On the whole, the film projects a feeling of impartiality, that we are watching a series of events and hearing the points of view of a wide range of people, but there are suggestions that we are meant to side more with those who want to change Yasukuni. The pro-Yasukuni contingent, for example, are depicted as either extremely old (there are some sweet elderly moderates), or in positions of political power (Mayor of Tokyo, Koizumi), or crazy and prone to violence. The film shows some wonderful ironies, such as the American pro-Koizumi protestor and the young Japanese anti-nationalist protestor who is mistaken as being Chinese. The audience I watched with at Nippon Connection, had the strongest aural reaction (ie. collection sharp intake of breath) to the Tawainese protestor when she lost her cool and used some pretty outrageous language to express her feelings about Shinto. It was a moment that certainly complicated my feelings of sympathy for her cause.
The most interesting things in terms of interpretation of the director's voice is the ending. The film ends with a prolonged montage of historical footage related to the shrine (mostly at the shrine, or war-related/ political incidents). The interpretation of this sequence requires historical knowledge to a certain extent as there are no title cards to put the images into historical context. It begins with aerial footage of the shrine with an operatic score accompanying it. There is a lot of archival footage of Hirohito (who was emperor throughout the war years and postwar years until his death in 1989), beginning with him as a young man all the way up to showing him as an old man. I was starting to feel as if the montage, combined with the music seemed to be romanticizing the shrine and Japanese militarism too much, but then the director throws in shocking images of Japanese war-time brutality - a couple of which the audience would recognize from earlier in the film. It's an odd little montage, and I would have to watch it again a couple of times to really interpret it.
I highly recommend this film because it will give you plenty to think about and talk about. I hope it is the first of many introspective films about Yasukuni to come out of Japan. One important thing to remember, is that this is not some film by a Chinese malcontent, as the Japanese nationalists have suggested in their fanning of the flames of controversy. Li made this film after many years of living in Japan and many of his crew, including the cinematographer Yasuhiro Hotta, are Japanese. He also had support from the Japanese filmmaking community, particularly his Japanese distributor. The inception of the controversy surrounding the film was that he got partial funding from a cultural agency funded by the Japanese government.
For a wonderful article that goes into much of the historical and political background this documentary film comes out of, as well as an interview with the filmmaker, click here.