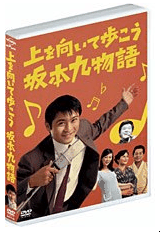 I wept my way through last half of the biopic Ue wo Muite Arukou: Sakamoto Kyu Monogatari last night. The made-for-TV drama, which originally aired on Tokyo TV back in 2005 to mark the 20th anniversary of Kyu Sakamoto’s death, pushes all the usual buttons from a J-dorama. Even though it was all very predictable – his story has become a legend – hearing the songs and seeing the smiling face of Tatsuya Yamaguchi recreating the cherubic, pock-marked look of the singer lovingly known in Japan as Kyu-chan made the anticipation of waiting for the tragic end a weep-fest for me.

The film starts by giving an idyllic impression of his childhood, in spite of the hardships the family went through during the war. There is an emphasis on his mother as his moral and emotional center. His parents’ divorce is depicted with a dash of humour to lighten the mood, and the family is shown to be fairly forgiving of their often misguided father. The biopic is at its best during the performance scenes and the depiction of Kyu-chan’s relationship with his family. The name ‘Kyu’ means 9 in Japanese and indicates that he is the ninth child in his family. I always found this comical and was pleased to see (if the screenplay is an accurate portrayal of events) that his mother was against this name and preferred to call him Hisashi.

There are several scenes in which Kyu-chan’s parents explain to him why he is famous (so that he doesn’t forget to appreciate his fans and to make sure he keeps his ego in check), but the moment that really encapsulates his success for me is the scene when he is first trying out “Ue o muite aruko.” The lyricist Rokusuke Ei has misgivings about the liberties Kyu-chan is taking with his enunciation, complaining that he doesn’t even sound Japanese. Composer Hachidai Nakamura wins him over by explaining that Kyu-chan is modernizing Japanese pop music by learning from Elvis. It’s a great little scene and perhaps the only one in which Tatsuya Yamaguchi sings. Yamaguchi does also sing professionally, but they were wise to have him lip-synch this film. Kyu-chan had such a unique sound it would have detracted from the film if his voice hadn’t been central to it. To give Yamaguchi credit were it is due, I think he did a rather fine interpretation of Kyu-chan. The look and style of talking are so removed from Yamaguchi’s own star pop-star image that I didn’t recognize him at first. He was brave to take on such an iconic figure… and such iconic pimples!

I was disappointed that they didn’t stretch the budget to shooting overseas, or at least with non-Japanese actors, to show his whirlwind visit to the United States and Europe after the surprise success of Sukiyaki on the North American and European charts. For those of you who don’t know the story, Kyu-chan’s Ue o muite aruko (I walk while looking up) was released to popular success in Japan in 1961. A British music executive heard it and a cover version was released in the UK by Kenny Ball and his Jazzmen under the title Sukiyaki. They thought the song name would be too difficult to remember in English so the executive chose the name of his favourite Japanese food. It became a surprise hit in the States when a Washington DJ picked it up and started playing the original by Kyu-chan. Sukiyaki had the distinction of being the first and only song sung entirely in Japanese to go to number one in the States.

They could have added some really comical, refreshing scenes to the biopic if they had added his stop in America at least. This clip of his on the Steve Allen show gives you a glimpse of what I’m talking about. I also wonder why they only hinted at his work in movies. Surely, there must have been some drama to be found there. Instead, we are given montage after montage over Kyu-chan’s greatest hits. While this was all pleasant to watch it lacked drama and didn’t satisfy my curiosity about the man behind the image and voice. I also thought they would show the final note he wrote to his wife before the plane crashed. I believe his wife wrote about it in her memoirs. Perhaps they thought it would be too much.

To end on a more cheerful note, here’s a little bit of movie trivia, related to Kyu-chan: the very last person he interviewed for television before he died was the legendary cinematographer Kazuo Miyagawa (ie. Rashomon). You can watch the show here – sorry no English subtitles, but it’s worth watching! The best is part three when Shintaro Katsu, of the 1960s Zatoichi series, joins the proceedings. Miyagawa also shot some of the Zatoichi films. Some hilarious stuff! Shinataro Katsu’s jokes are made all the funnier watching Miyagawa trying to restrain his laughter.

The DVD of Ue no Muite Aruko: Sakamoto Kyu Monogatari is available at cdjapan: