Waiting on the Weather 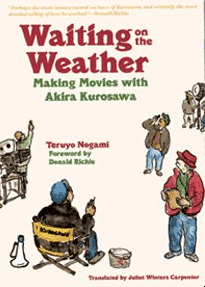 Yoji Yamada’s adaptation of Teruyo Nogami （野上照代）’s memoir Kaabee – Our Mother made a splash at the Berlinale earlier this year. It is wonderful that Nogami has distinguished herself as more than just an assistant to Kurosawa with her recent autobiographical writing. Many Japanese women have worked diligently behind the scenes in the Japanese filmmaking industry, but few of Nogami’s generation have received public recognition for their talents. Nogami’s Waiting on the Weather: Making Movies with Akira Kurosawa was published by Stone Bridge Press in 2006 and it is truly a delight to read.

Waiting on the Weather was originally published as a series of essays in Kinema Kurabu and other publications during the 1990s. It was collected and published as a book in Japanese in 2001 under the title Tenki Machi: Kantoku Kurosawa Akira totomo ni (天気待ち―監督・黒澤明とともに). As the essays were written over a period of at least six years, during which time many of Nogami’s closest friends and colleagues including Kurosawa himself passed away, there is some repetition and a lack of fluidity between chapters. However, this is more than remedied by Nogami’s warm and humorous narrative style.

In the first few chapters, Nogami tries to hide behind a polite veil of modesty claiming that it was a matter of chance that she found work as a script girl (what is now known as a script supervisor or continuity editor) first at Daiei Kyoto Studios and later at Toho Studios in Tokyo. She even goes so far as to share with her readership some of her most embarrassing continuity errors, which she fortunately caught before the final edit. Donald Richie counters Nogami’s modesty in his introduction by emphasizing what a vital member of Akira Kurosawa’s production team she was from Rashomon through to the end of his career. She even worked on Takashi Koizumi’s adaptation of Kurosawa’s screenplay Ame agaru (After the Rain, 1999). Kurosawa was notoriously difficult to work with, but as Richie points out, he “came to rely greatly on Nogami: on her care, her memory, her quickness, her probity.”

The anecdotal style of narration is reflected in the title of the book, which refers to the time film crews and cast spent waiting for the perfect weather conditions in order to shoot scenes. In the days before green screens, filmmakers had little choice but to wait on the weather. Nogami remembers these periods of waiting fondly; for these were the moments that the crew could get to know each other and indulge in gossip.

Juliet Winter Carpenter has done an admirable job of translating Nogami’s witty prose into English. Nogami has also illustrated her stories with pen and ink drawings that capture her humourous anecdotes in vivid detail. This reminded me of Agnes Newton Keith’s autobiographical writing, such as her famous memoir Three Came Home about her time as a Japanese prisoner-of-war in Northern Borneo. Newton Keith’s work was well-known in Japan before and after the war so it is possible Nogami may have emulated her style.

My favourite part about this book was the revelation that Nogami’s first contact with the Japanese filmmaking community was through the great director Mansaku Itami. As a teenager, Nogami wrote Itami a fan letter in response to his comic samurai film Akanishi Kakita (Capricious Young Man, 1936). Itami wrote back to her and they continued a correspondence throughout his illness with tuberculosis until his early death at age 46. Her connection to Itami led her not only into the film industry, but it also led to her close relationship with his family after his death. She even shared her small apartment in Kyoto with Itami’s teenaged son Yoshihiro, who would grow up to become acclaimed director Juzo Itami (Tampopo, 1985).

The Itami family anecdotes were an unexpected bonus to the wide variety of stories about making movies with Akira Kurosawa. From his legendary rages to his after-hours drinking sessions with the crew, Nogami’s memoir serves as an elegy to a remarkable time in Japanese filmmaking history.