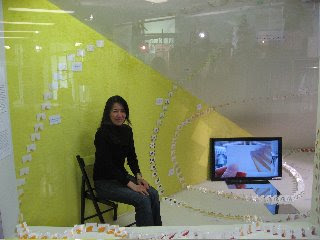 The work of animation artist Maya Yonesho (米正万也) jumped out at me when I first watched the collaborative film Winter Days because her unique style of combining types of handmade animation (stop motion of a book and watercolour animation on the pages of the book) reminded me of the experimental films of Norman McLaren and Oskar Fischinger. In a recent e-mail exchange with me, Yonesho added the names of Taku Furukawa, Kihachiro Kawamoto and Clive Walley to the list of filmmakers whose work has inspired her. Like McLaren, Fischinger and Walley, Yonesho’s work is abstract and she likes to synchronize her animation with music and sounds. Her work is identifiable by her use of cheerful watercolours and her mixing of media. Wiener Wuast, for instance features a hand holding up a card of paper against various outdoor Viennese locations with watercolour animation dancing across the paper synchronized to music by Norbert Trummer.
Many contemporary animation artists come to Europe in order to immerse themselves in unique animation traditions such as the Czech school, the Estonian school, the Aardman school in the UK, among many others. Kihachiro Kawamoto was the forerunner of this trend when he studied under Jiri Trnka in Prague in the 1960s. Fusako Yusaki, whom I wrote about last September, has been a central figure in the Italian animation community since the success of her Fernet Branca commercials in the 1970s. The relationship between European and Japanese animators has strengthened in recent decades through artists sharing work at animation festivals in Utrecht, Oberhausen, Hiroshima, and elsewhere.

Maya Yonesho has an MA in Conceptual and Media Arts from Kyoto City University of Arts. She has also studied in England and did a research project in Estonia in 2002. Yonesho then found herself invited to be a member of the jury at the Tricky Women International Animation Festival [note: the ‘Tricky’ in the festival name is a play on words involving the German for animation: der Trickfilm or der Zeichentrickfilm] in 2003. This has led to a long creative relationship with the city of Vienna. Yonesho currently divides her time mainly between Vienna and Kyoto. In Vienna, she teaches workshops, makes films, and does exhibitions of her art. In the autumn term she lectures at Kyoto Seika University.

Thanks to modern technology, Yonesho finds that she is quite flexible to be able to work anywhere in the world using a scanner, laptop, and he International Express Mail service to send her short animation work to the NHK (the Japanese public broadcaster). She recently completed a series of 6 one-minute films for the NHK very young children called “Dance of Circles, Triangles and Squares” and her current project “Colours of the Seasons” will have four installments, one for each of the seasons.

In describing her method of filmmaking, Yonesho says “When I create an animation, I first decide on a theme, then edit the sound, and finally I draw the images to match the sound. The theme always develops from something that has been on my mind, but rather than create a story and address the theme explicitly, I prefer to express abstractly, through sound and music, a mood or atmosphere that cannot be expressed in words. Naturally, it pleases me when a viewer can perceive and empathize with the idea I had in mind when I created the piece, but I like for each viewer to interpret it in her or his own way. One of the aspects of animation I love is simply the fact that it moves. In my work I emphasize this aspect of movement and also rhythm, so I try to keep the shapes as simple as possible, and have them move to the rhythm in pleasing ways. The reason I often make the sound before I make the image is because I see sound as an extremely important element, when I use a person's voice, I try to analyze it and make the image complement the mood of the voice” (Source: Akademischer Arbeitskreis Japan)

In Yonesho’s work, one finds a desire to use images as a form of international communication. Her first abstract animated short was synchronized with theme “we can understand each other without understanding each language” (Source). This idealitic vision is reminiscent of the ending to Norman McLaren’s Neighbours (1952). I was also reminded of an interview I once read with Sayako Kinoshita, who founded the Hiroshima International Animation Festival in the 1980s with her husband Renzo Kinoshita. The Kinoshitas, after enjoying a positive reception at animation festivals abroad in the 1970s decided to start a similar festival in Japan with the ideal of striving towards world peace through visual communication. Hence the decision to host the event in Hiroshima.

Yonesho’s recent film Wiener Wuast plays with notions of the tourist observing the city of Vienna. I found an interesting critical discussion of a recent screening of the film at the MASC Foundatation on Paul Sakoilsky’s blog. He also provides several high resolution stills from the film and a link to a tiny video of the film. The title translates as Vienna Mix and since 2006 Yonesho has also produced other workshop films in a simalar style including Taiwan Mix, Norway Mix, Croatia Mix, and Israel Mix.

Update: Maya Yonesho's work can now be purchased on DVD from Anido.

My thanks to Maya Yonesho for her correspondence with me about her work. Check out her website for more photographs of her work and her CV.