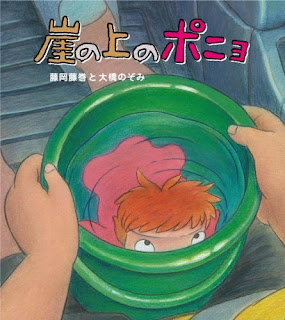 The excitement surrounding the next Hayao Miyazaki film, Ponyo on the Cliff by the Sea (崖の上のポニョ,) is starting to build online. Studio Ghibli's official website is slowly allowing more and more information about the film to leak onto the internet. Ghilbi World has translated much of the latest information with pictures here.

The film will tell the story of a goldfish princess called Ponyo who dreams of becoming human. In the course of her story she befriends a young boy called Sosuke, who is rumoured to have been based on Miyazaki's son (of Earthsea fame) he was five years old. From what I understand, the film draws inspiration from Hans Christian Anderson's The Little Mermaid and the Japanese folktale Urashima Taro in which a fisherman rescues a turtle.

There is talk that the official Japanese trailer for the film will be available later this month, and a release date for the film will be sometime in the summer. The online production diary says that the number of animation cels numbers more that 160,000. Nausicaa.net compares this to the reported 112,000 used in Spirited Away (2001), 140,000 in Princess Mononoke (1997), and 148,000 in Howl's Moving Castle (2004). The film is being animated without CGI and will have a watercolour look, much like Isao Takahata's My Neighbours the Yamadas (1999).

For a peek check out the official soundtrack song performed by Fujioka Fujimaki (stage name of popular duo Takaaki Fujioka and Naoya Fujimaki). It was released to much fanfare in early December. I really like the song. I think it has the potential to become a children's classic in Japan just like the opening & ending songs from Tonari no Totoro.

Ponyo on the Cliff by the Sea (English, French, Spanish etc..Audio/Subtitles) [Blu-ray]
Animation
Posted by Cathy Munroe Hotes at 2:23 am