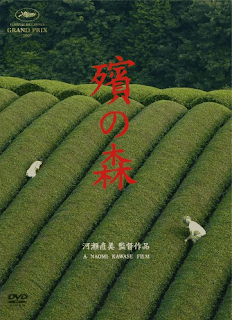 There is an old Japanese saying (Nihon no kotowaza) that says “Iwanu ga hana” (言わぬが花) which literally means “to not speak is a flower” and is roughly equivalent to the English proverb “silence is golden.” While a few filmmakers can get away with using a lot of dialogue in their films (Woody Allen would be a rare exception), the best films are the ones the privilege the image over dialogue. The Mourning Forest is just such a film.

Naomi Kawase’s poignant The Mourning Forest (殯の森, 2007), which won last year’s Grand Prix at the Cannes Film Festival, tells much of its story through character expression, mise-en-scene, and its subtle use of sound. Set in the Nara countryside that Kawase grew up in, the film tells the story of Machiko (Machiko Ono), a young woman who works in a senior citizen’s home and has recently lost her young son. One of the elderly residents in the home, Shigeki (played by non-actor Shigeki Uda) is drawn to Machiko because he reminds him of his wife, Mako, whose name is only one syllable different from Machiko’s.

Their relationship is rather awkward and uncomfortable at first. Shigeki behaves in an unpredictable manner that often throws Machiko off-guard. With time, however, they grow closer and their friendship is established in a beautiful scene in which they play hide-and-go-seek among the rounded rows of tea bushes.
Machiko and Shigeki also bond over their shared grief for their loved ones. Machiko’s grief is very fresh and Shigeki’s mourning for his wife is heightened by his senility. In Japanese Buddhism, ceremonies are performed to celebrate the karma of the deceased taking on a new form. The first such ceremony takes place on the 49th day after a person’s death. The Buddhist priest in the film reminds Shigeki that the 33rd anniversary of his wife’s death is approaching which means that she will undergo her final transformation and become a Buddha.

It is with this spiritual set of circumstances that Machiko takes Shigeki out for a daytrip in the countryside. The day is going well until Machiko runs the car into a ditch. She wavers about leaving Shigeki alone with the car, and shouts out towards the neighbouring farm for help. When she receives no response, she decides to risk leaving Shigeki for a few moments in order to find assistance. When she returns, she discovers that Shigeki has run off into the woods.

Machiko follows him but he resists returning to the car and heads ever deeper into the forest. At first, Machiko pleads with him to come with her, but after a while she acquiesces to fate and follows him silently through the trees. The forest, with its looming trees and floor thick with sasa (dwarf bamboo), gives the film its emotional centre. It is mostly dark, with the sun occasionally breaking through the thick canopy of leaves. At the end of the film, a title card explains that the term ‘mogari’, or period of mourning comes from an older expression ‘mo agari’ meaning the end of mourning. Thus the forest takes on a symbolic meaning as the site for of the resolution of the mourning process.

When The Mourning Forest won the Grand Prix last year against some stiff competition from internationally established filmmakers like the Coen Brothers and Quentin Tarantino, there were grumblings from reporters that it was a compromise choice or a political decision to reassert Cannes’ reputation for honouring art films. The film also made it into the Shukan Bushan’s list of ten worst movies of 2007, where they criticized the film as being ‘boring.’

To be sure, the film does move at a slow pace and requires a spectator who is willing to open themselves up to the spiritual journey of the protagonists. Coming in at 97 minutes, it’s not nearly as slow-paced as an Andrei Tarkovsky film though it is just the kind of poetic film that Tarkovsky would have enjoyed watching. The use of a location as the site of an emotional journey reminded me of Peter Weir’s haunting Picnic at Hanging Rock (1975) and a moving little film, perhaps little known to those outside Canadian film studies, The Company of Strangers (Cynthia Scott, 1990). Like The Company of Strangers, Kawase also blurs the lines between documentary and fiction modes in that the characters have the same name as the actors playing the roles. If you like the films of Abbas Kiarostami, Krzysztof Kieslowski, or Kenji Mizoguchi, then The Mourning Forest is most definitely for you.