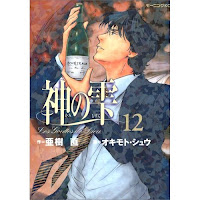 Felicity Hughes has written up a wonderful interview she did with Tadashi Agi about their manga series Kami no Shizuku (The Drops of the Gods) in order to gauge their reaction to the manga's debut in the French language. Tadashi Agi is the pen name of the brother and sister team that writes the storyline: Shin and Yuko Kibayashi. The illustrations are done by Shu Okimoto.

The manga, which has been running in weekly installments since 2004, tells the story of Shizuku Kanzaki, a young wine connoisseur whose father, renowned wine critic Yudora Kanzaki has just passed away. Shizuku must compete against his rival and adopted brother, wine critic Itsusei Tomine to find his father's 12 most prized wines - the 'gouttes de Dieu' of the title. The person who finds them all will inherit the father's prized wine collection. The wines featured in the manga are not fictitious, and the authors describe them romantic, exaggerated language.

Kami no Shizuku has already had tremendous success in South Korea and China, so I feel sure it is only a matter of time before it gets adapted into an anime. The series has clearly already done for French wine sales in Asia what Nodame Cantabile did for popularizing classical music study for teenagers. The only false note in Hughes's otherwise delightful article, were the opinions of French wine expert Tim Johnson, who claimed "It doesn't seem to me like a serious art form, and the French are so stuffy about wine. . . I can't see it going down well with the establishment." Clearly Monsieur Johnson is ignorant about the popularity of Japanese culture, in both its high and low forms, in France. The French are avid manga and anime consumers and I feel sure that the French wine industry, which has been suffering at the hands of competition from America and Australia, won't turn their noses up at some free advertising in a work of popular fiction.

This manga sounds like a lot of fun (I've had a glimpse at illicit scans of it online), and I've been looking for something fun to read in my down time (ie when I'm not watching experimental films for my research). I'm not sure that I can wait to get a hold of a copy of the manga from Japan, so I may order the debut copy from Amazon.fr. I can add it to my order of Naomi Kawase's films Moe no suzaku (1997) and Sharasojyu (2003) which are very reasonably priced in France. If you are a Japanese film collector and can read French (or don't need subtitles), it is definitely worth looking at what's available on DVD in France. They have a wide range of Japanese cinema and anime that one cannot find in North America or the UK, and it is much cheaper than buying DVDs from Japan.