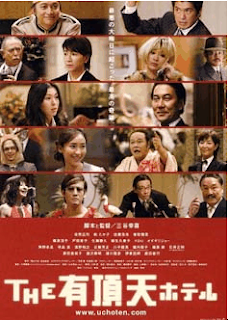 I find it surprising that The Uchōten Hotel (2006) has not yet been snapped up by distributors in North America and Europe. Perhaps they were unable to see past the bad English pun in the full original title: The 有頂天ホーテル (Suite Dreams). The producers must have thought it would be cool to have three kinds of script (romanji, kanji, and katakana) in the title. Translating the title directly into English would make it sound like a bad porno flick – Ecstasy Hotel – but if they repackaged it as Hotel Avanti, the actual name of the hotel in the film, the film would appeal to the same overseas audiences who fell in love with Kōji Yakusho (役所 広司) in Shall we dance? 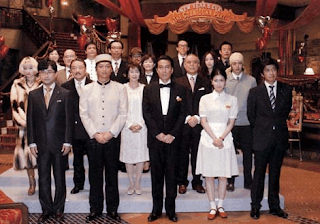 The success of the film was doubly assured by the reputation of its director Koki Mitani (三谷幸喜). Mitani has a history of producing quality television series like Furuhata Ninzaburo (古畑任三郎, 1994) and the popular and critically acclaimed chambara series Shinsegumi! (新選組!, 2004). Mitani’s biggest hit was the 1997 film Welcome Back, Mr. McDonald (ラジオの時間) which, like The Uchōten Hotel has a large cast and a complicated storyline.

The Uchōten Hotel adopts the setting and style of Grand Hotel (Edmund Goulding, 1932). The set, particularly the central lobby, resembles the set of Grand Hotel

and Mitani emphasizes the allusion by having suites named after the stars of the classic talkie: Barrymore, Crawford, Garbo, and Lionel. Grand Hotel is also famous for being the first film to successfully weave a large cast with multiple storylines into an engaging picture. However, Grand Hotel was at heart a drama with comedic flourishes, whereas The Uchōten Hotel is more of a screwball comedy.

Mitani throws into the mix an homage to the witty repartee and grace of Billy Wilder’s best comedies. The hotel’s name refers to one of Wilder’s lesser known films Avanti! (1972), and the costume play and pace of the film reminded me of Some Like it Hot (1959).

There is a touch of Robert Altman

in the skill with which Mitani balances his web of subplots and large cast. Mitani also shares Alfred Hitchcock’s passion for playing with filmic conventions by sticking to a one shot per scene rule à la Rope

I recommend this film to fans of screwball comedies who are prepared to watch without cynicism. It’s a film for light-hearted film fans, particularly fans of Japanese television comedy and drama.